Whilst it is known that Thin Lizzy's Phil Lynott composed the song King Call as a lament to Elvis Presley, it is remarkable how apt the above lyrics are with regard to the current furore which has erupted over the Governor of the Bank of England, Mervyn King's, comment yesterday that our government could not afford another economic "fiscal stimulus" package, a comment which has been swept under the carpet by Prime Minister Gordon Brown as he prepares to "indebt" us even further.


There is of course good reason for Gordon to ignore the statement - that being that "he" wishes the economy, both British and Global, to fail, in order that we can all be saved by a golden hearted redeeemer (another King), around 2011 - 2012.

I shall explain more, including an incredible but potentially true diagnosis of the truth of 2012, in a fairly long post this coming weekend. 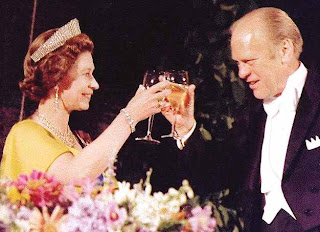 Picture is Queen Elizabeth, in her younger and slender days, with President Ford.

Posted by Newspaceman at 21:22

Isn't the Bailout bill something like 3 times the whole NHS annual budget.
How does one deal with that sort of witlessness?
have u read SILENT WEAPONS FOR QUIET WARS , I guess they have.

Anyhow The Czechs have just collapsed the government while holding the EU presidency.
The thing is , is that it's all personal political infighting, totally self-aggrandizing actions.

Czech people can only think ' What the fuck do u think youre fucking doing. What's wrong with you" etc etc.

Being a politician isn't that hard work and pays well, so Czechs are amazed that they can't even stick together for 6 months.


Some ascribe 'humbleness' which I guess is all u can wish for when someone's driving over u with a steamroller.