Making an Arsenal out us, ceremoniously ? 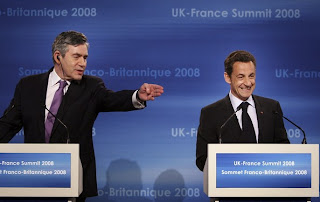 Casting back to my comments on the number 3 and its numeric cubik form of 27 in relation to the signing of the European Treaty of Lisbon, then perhaps one would be looking to yesterday, the 27th of March, for further clues as to our potential and pre-packed future.

We see that French President Nicolas Sarkozy concluded his hectic visit to the UK, bringing the two day summit to an end by giving a press conference jointly with British Prime Minister Gordon Brown, at Arsenal Football Club's Emirates Stadium in North London. 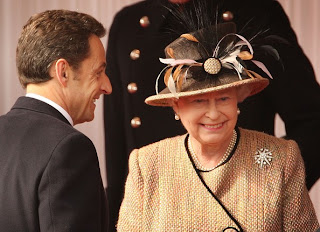 It seems matters did not go entirely to plan, certainly according to the Press Association running order issued in the morning, which gave the "UK France summit time" as 11.30. The duo apparently ran late, and as such, matters did not properly begin until 13.00 or so. Both schedule and actual time details are available here, courtesy of Guardian News.

Speaking to reporters on the pitch ahead of formal talks, Mr Brown announced a joint British-Franco initiative to help to bring education to 16 million children in Africa.

"The communique was particularly detailed about planned cooperation on defence projects - including "a joint industrial strategy for complex weapons" and co-operation to "develop European military capabilities".

Now it may just be coincidence that from today's Daily Express we see that there was a massive and unprecedented "army style" 600 strong police raid in the North London borough of Finsbury Park at 14.15 yesterday, a place "very close" to the new football stadium according to wikipedia.

Then again, it may not, especially if one considers the significance of the number 33 to the freemasonic cause and that:

Could it be that whatever way you craft it... ? 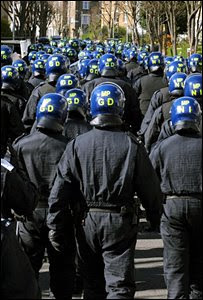 Posted by Newspaceman at 11:15

I happened to read KING KILL-33 by james Shelby Downard a week or so ago and it reminded ne of JFKs death date - 11/22/1963.
Remembering Ian Paisley , who can forget the statement in the EuroParliament that 'The Pope is the AntiChrist' and i think thay he implied that the whole EU was in fact a 'papist conspiracy'. Any how brushed under the carpet very quickly.

Hiya aferrismoon, I had a quick read of the link on wiki. for jsd, being honest I had never heard of him.

One thing jumped right out though and that was:

" Because Masonry is obsessed with earth-as-gameboard (tessellation) and the ancillary alignments necessary to facilitate the "game," it is inordinately concerned with railroads and railroad personnel to the extent that outside of lawyers and circus performers, no other vocation has a higher percentage of Masons than railroad worker"

I have one of Paisley's books here somewhere, a flimsy, size-0-thin red paperback, can't remember the name