From Paris to Rosslyn 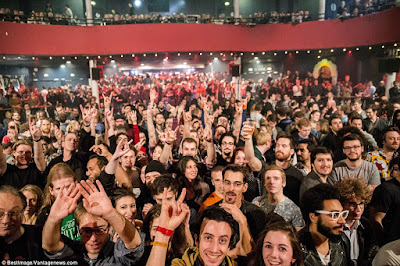 The image above is from last Friday, the 13th, just prior to the commencement of the Eagles of Death gig in Paris. Some of the crowd are making a "horned hand gesture", allegedly in "respect" of the devil.

When the gunmen struck, the band, who lead singer is nicknamed the Devil, were playing "Kiss the Devil". (here)

Their song prior was a cover of Duran Duran's, Save a Prayer. Apparently there's a notion doing the rounds to get the Eagles of Death version to the top of the charts this week.

Princess Diana dug Duran Duran, allegedly they were her favourite group, perhaps due to phonetic pronunciation. On 1st  December, 18 (3x6) days after the Paris attacks, it will be 6666 days since her demise. (here)

Back in 1969, when  the Rolling Stones played the Altamont music festival, Hells Angels provided security. Some scuffles had broken out in the crowd before the band's appearance. As they commenced their set, with the track Sympathy for the Devil, the fighting became more intense. By the time they complete their next song, Under My Thumb, a man had been murdered. At the time, American media referred to the band as "an intimidating brooding coven".

Back in 2013, when the Stones played Glastonbury, they performed Sympathy for the Devil. No one died but a large fire breathing phoenix rose from the Pyramid Stage. (here) 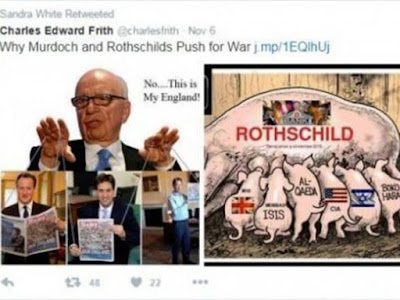 Last Friday's news carried the story of a Scottish Nationalist politician who found herself in soapy bubble after retweeting an image of a cartoon depicting "six piglets, representing Britain, the US, Israel and terror groups Isis, Al Qaeda and Boko Haram, suckling from a large sow with the word "Rothschild" on it." (The Independent).

Friday 13th is considered unlucky allegedly due to a massacre of the Knights Templar on the same day and date, many moons ago.

Some people believe that there are links between Paris and Rosslyn Chapel. Allegedly they are connected via the Knights Templar, the "roseline", and "bloodlines of Jesus", amongst other matters. This theory went viral with Dan Brown's fictional Da Vinci Code.

Yesterday, three days after the 13th, it was reported that three skeletons which were discovered during renovation works at Rosslyn Chapel had been reburied within it's grounds. (BBC)

Back at the start of the year, the Economist magazine front cover allegedly contained a Da Vinci "portent" to the events of last Friday. The images are below, for consideration. 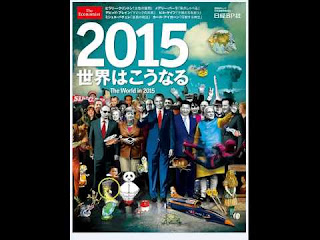 Note, since I posted it has been revealed that Duran Duran were in fact in Paris last Friday whilst there last album, Paper Gods, was released just a couple of months ago, on September 11th.I did a quick google and it seems that they were performing as part of some sort of  "24 Hours of Reality and Live Earth: The World Is Watching global broadcast event". I'll try to look into Duran Duran in more depth later in the week, there is a further connection with Paris via their splinter group, Arcadia.

The portrait at the right-hand side of Alice.......who she ?

On a different tack - this year's Christmas advert for J'adore perfume.......comments/thoughts, please.

Associated with DaVinci and Francis 1. (and according to some a cute little story about cuckold's revenge)
Francis 1, with most other French kings, is entombed at Saint Denis Basilica. He was also the first French king to ally with the Ottoman Empire. According to some reports the bells of Saint Denis rang every 15 minutes during the recent police raid there. The police did however raid the nearby Eglise Saint Denis de l'Estree, breaking down one of the doors.
http://www.theguardian.com/world/live/2015/nov/18/paris-attacks-police-hunt-ninth-suspect-as-germany-on-alert-after-hanover-bomb-threat-live#block-564c6c54e4b0e98c91b0d4c9

Many thanks to you both, Anon 2 I will look at the advert later today or tomorrow.

My next post will hopefully be out over the weekend, there was a curious twitter message doing the rounds about aScotsman who was allegedly in hospital badly shot up after the "Eagles" concert, however he does not appear to exist. His name was Hamish Callum McDonald (I can do something with that) with ginger hair (Merovingian?), and 6ft 4.

Note, there's an image on the link below of Prince William signing the book of condolence for Paris.

If anyone knows who the portrait in the background is of, then pleaase let me know.

A reverse (mirror-image) copy of then'Lady with the ermine (stoat)'.
Ermine stands for purity and, thus, the picture (ferroniere) is a lady without purity........recent paris events ?!

The Magdalene had a blue cloak over a red/crimson shirt.....as per the lady of purity.
Jesus wore a red cloak over blue.
Yin and Yang.

I notice today the Belgians are on high-security.

The image from the Eagles of Death gig is totally bad photoshop - even if it hadn't been it does not mean it that it was from that concert especially since we are talking about an obscure band in the US never mind here in Europe and we are expected to believe they would get taht many people at their concert in the first place.

Where did this fake image come from in the first place?

Am struggling with time, will have some tomorrow, will catch up with matters then.

Quote: "Both princes wore shirts emblazoned with the name of the Black Horse Inn, the pub in Castle Rising, to play in a yellow and black shirt"
Read more: http://www.dailymail.co.uk/femail/article-3373153/Prince-Harry-Prince-William-annual-Sandringham-Christmas-Eve-football-match.html#ixzz3vLGoYy4Z

This is it / Jesus at the cross / MJ / Baphomet

Please mail me at sabinevlaming@gmail.com if the images do not come through