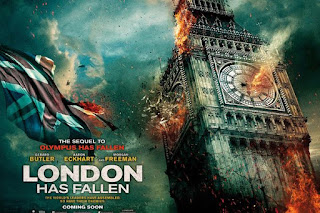 Last Friday, I covered a small variety of topics, a trio of which - Lionsgate, Tunisia and Lockerbie - reared their ugly heads again in the seven days since.


Beginning with movie-maker Lionsgate;  apparently "they" have courted controversy in respect of a promotional advertisement concerning a forthcoming movie called London has Fallen, in which depicts  England's capital city as the setting for a terrorist versus world leaders mini-war. It seems that the timing of the promotion has left a bitter taste in some quarters given the proximity to 7/7. (Daily Record). We saw the same quite recently with Ninja Turtles and 911.

This week also saw a drill in respect of "an imminent", allegedly, forthcoming terrorist attack on London. Blood drenched crisis actors were in abundance, however the aforementioned "bitter tastes" seemed curiously bland in respect of this portrayal, after all, it's to keep us safe. 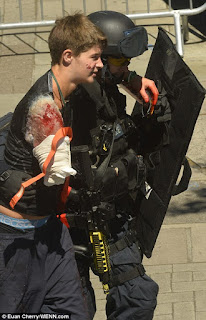 A minutes silence for the Tunisia victims today in the U.K., H.M Queen doing her bit alongside Philip at Glasgow's Strathclyde University. Also in Scotland yesterday, in the capital where HM is ritually residing this week, an attempt by the victims' relatives to appeal the alleged Lockerbie bomber, Megrahi's, conviction was dismissed under Scots Law (a curious Roman/nautical/Biblical  hybrid) :

Delivering their judgment, Lord Carloway said the law was "not designed to give relatives of victims a right to proceed in an appeal for their own or the public interest". BBC

Down in England in the Houses of Parliament, the Scottish National Party's "power" looks like it may soon be diluted. The bill is called EVEL, talk is of a second referendum for Scottish independence - whatever that means in the forthcoming, money driven, new world order. I've made my own thoughts clear previously.

Whilst sticking with Scotland, it was obviously a slow-news-day yesterday, the mail on line reporting that Prince William, who has recently turned 33, took aRyan air flight to Glasgow. (here)

Whilst to close, today's BBC reports that Princess Charlotte will be baptised tomorrow using "special water" from the river Jordan. Apparently the liquid has a "spiritual" connotation given that the wandering tribes of Israel crossed into the Promised Land at the spot. Make of that what you will.

cheers
Posted by Newspaceman at 11:39

Whilst to close, today's BBC reports that Princess Charlotte will be baptised tomorrow using "special water" from the river Jordan. Apparently the liquid has a "spiritual" connotation given that the wandering tribes of Israel crossed into the Promised Land at the spot. ,,, hilarious! Jordan means river from the land of the Dan. The Dan, worshipers of Baal now Baphomet. Guess it all adds up?

It was the Dan who used the flag of the Harp. See Ireland and Tuatha de Danaan. Or even Merovingian dynasty. Descendants of Daniel. The "boat people" of Egypt and then land of Denmark or Danmark. Dansk, etc.

It all adds up, thanks for the link. There's rivers Don and Dee (see John 007) close to "the" Queen's Bal-moral. Rowling finished "her" HP series at the Balmoral Hotel in Edinburgh. Tribe of Dan (British Israel) is the key

Good video - ring of fire ? on google about it.

p.s. - it's "chosen one" cabalistic/masonic symbolism, not really religion ?