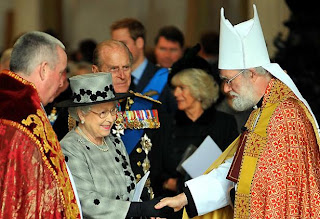 Hot on the heels of HM the Queen's output from Christmas Day, the Archbishop of Canterbury, Rowan Williams, has called on people of "all faiths" to see the "big picture" by discovering the King James Bible.

Furthermore, it is apparently "vital" to the "big society" envisaged by ministers - and by that he means politicians, not the Church of Scotland one's who used to send their "elders" round to my Grandad's when I was a boy, asking him to sign a covenant (a method of reclaiming tax on a regular, legally documented, contribution).

Thus we surely see an unholy trinity: monarchy, church and government combining under the auspices of "God's word" to create what seems like bonded slavery.

Remember too that the concept of this "suits-all" Bible production was originally envisaged by King James; not at Hampton Court, but rather Burntisland, in Fife, Scotland, very close to where King Alexander 3rd of Scotland, born 11th September (n/s), seemingly died after drunkenly falling from his horse - a death which proved most decisive in the future history of Scotland and thus the world.

thanx for your reply.i have been watchin streetmunk.com ,aeiou3sext,mooji and adyiashanti all can be found on youtube.Have a look see what you think and let me know.i personally think streetmunk.com talks a lot of sense,however he has few veiwings.Also Tony Parsons on you tube is an interesting watch.just lettin u know what i know.

also your resarch i find to be fantastic.thanx for sharing your knowledge.And have a happy new year.

"Hot on the heels of HM the Queen's output from Christmas Day, the Archbishop of Canterbury, Rowan Williams, has called on people of "all faiths" to see the "big picture" by discovering the King James Bible."

what about the dilly llama? he gonna come out in favor of the kjv now too?

dood you created a monster here...

speaking of witch no offense but Rowan Williams looks like a druid, i dont know, lurking around stonehenge with a compass, heck even his name's a tree plus the 'will' tossed in -- he's due to be named a Global Elder by Desmond Tutu, you gotta have a druid to be truly Diverse

Yes indeed the (un)Holy Trinity. In the past the fight was always between church and state and the monarchy(ies) used their influences to control both sides of the debates/wars.

As per today, (a continuation of)'The war of the Two Kings' was played out in Glasgow.
A coming together of the faiths is, as you predict, 'in the plans'....though probably not as a continuation of any faith.

Incidentally, 'The War of the Two Kings' was only a bit part of a longer battle - The Nine (thrice-three) Years War - with rather interesting 'bed artners'....
William/
Leopold the 1st/
Charles/
Victor Amadeus

Further to the coming together of faiths and druid comments

I cannot get sound on computer at momenet Paulo, but will bear in mind. Temporary problem. Happy New Year to you too.

Ray, the last comment's links note that Rowan is a druid. Spot on, and thanks very much to the anon contributor.