"It is certain that onomatology, or the science of names, forms a very interesting part of the investigations of the higher Masonry, and it is only in this way that any connection can be created between the two sciences". (Encyclopedia of Freemasonry)

The "Stone of Destiny" hit the headlines last week, the report containing some material worth further investigation.

That's the Stone which was repatriated from England's Westminster Abbey on Christmas Day 1950 by a brazen gang of law students, to then re-appear at the alter within Scotland's Arbroath Abbey some 108 days later. It's the same stone some claim is Jacob's Pillow Stone. Others would say it's a Dr. Jekyll - a Jekyll and Hyde - a snide - a fake passed off to the English way back.

Friday's BBC News tells of reporter, Arthur Binnie, passing away, at the age of 89. Arthur's claim to fame, his "big scoop" which he did very well from financially, was to be the first reporter on the scene at Arbroath on the 101st day of the year, April 11th 1950, after receiving an (presumably) anonymous telephone call at his desk in the Arbroath Herald office. All he was told was that if he went to the Abbey, "he might find something of interest". Arthur grabbed a camera and cycled so hard en-route, the chain came off his bike. Yes, cycled, it was almost 66 years ago.

When Arthur arrived at the doors, the "uniformed custodian" led him "silently" to the high alter. Arthur, well aware of the missing stone, saw a Saltire draped over a stonemason's barrow. Arthur didn't need to employ rocket science to deduce what exactly it was, thus when the custodian pulled back a corner of the flag, "there it was....The Stone of Destiny". Arthur's oily hands received an envelope from the custodian containing a message from the four students which he took back to the office along with some snaps he had taken of the scene. Arthur was sure it was the real McCoy.

"Later he learned there'd been a mix up. A local councillor who'd been supposed to alert journalists had decided to let the police know first but the officer in charge in Arbroath that day took a while to establish the story wasn't a hoax.

Arthur Binnie had the discovery of the Stone of Destiny to himself.

I enjoy greatly James Shelby Downard's KK/33, regarding the masonic fingerprints all over the JFK assassination, the quote up top is from there.  Wikipedia carries a text, abbreviated: a fuller, yet alas not complete version is here

Arthur is a common masculine given name. Its etymology is disputed, but its popularity derives from its being the name of the legendary hero King Arthur.

I would recommend the reader peruses the KK/33 text, although it is somewhat hard going. Downard within connects the dots :

Before pointing to the mystical associations between the murder of the president and Shakespeare's tragedy of Macbeth I wish to call attention to the appearance of the witches in Act I, Scene 1 and to the line in which they chant "Fair is foul, and foul is fair". This is reminiscent of Hermetic Art (alchemy) as well as the "individuation" or "shaping" of an integrated personality in the psychology of C. G. Jung in which the "archetype of unity" (self-head, auto-cephalous), the Yetzer Ha-Ra and Yetzer ha Tov of the Jews, and the "Mingling of All with All" is manifested.
Thus, just perhaps, it was more than "good luck" that Arthur received his unique "scoop". 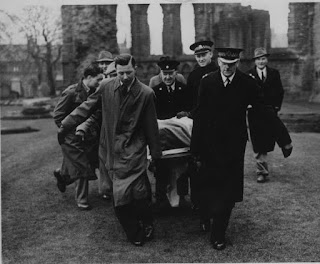 Maybe its not all that syncy, but here in the U.S., I just watched and episode of "Galavant" featuring the Arthurian sword-in-stone. I'm happy to see you mention James Shelby Downard and King Kill 33. For those newly awakened to the realm of civic ritual, Downard is essential. I'd like to recommend Downard's "The Carnivals of Life and Death: My Profane Youth: 1913-1935". In it he illustrates exactly the types of abusive hi-jolly hi-jinx of U.S. freemasonry.

Also note that today there was a malfunction in the draw of the Scottish Cup 1/4 finals - Celtic originally drawn to face Dundee away got Morton at home instead.
A comment by Danny O'Dea of Dundee

" Just heard that IF we beat Dumbarton we have Juventus in the quarter finals of the cops del rey! Good draw. "

reading a year of your posts backwards is fascinating

Thank you A New Day. I will try to read a copy of Carnivals over the weekend as, for the first time in a long while, I have some free time.

Moon, many thanks too. There's a lot more about the Binnie/Robert the Bruce angle that I should have covered in this post, reiterating Salmond's comment in 2014 that Bannockburn (i.e. the Battle) was the birthplace of modern Scotland, and thus, perhaps, the world to a certain extent - especially if we believe the Knights Templar legend.

Anon @23.30, lol, you are doing better than me, I can't stomach some of them, although there's a sprinkling I do have some pride over. Hopefully, or perhaps not in the grand scheme of things, we will see some action this year which spring me out of mediocrity.

Anyway, thanks to all, cheers

".....As the unity archetype and the organizing principle of the personality, the Self not only signifies the union of opposites within the psyche, but is also a God-image that symbolizes a wholeness toward which the psyche strives.

Here we see an obvious parallel to the zodiac, which has a center—symbolizing the individual—and a circumference symbolizing the 12-fold division of the collective psyche. According to Jung, the archetype of the Self incorporates within its paradoxical unity all the opposites embodied in the various archetypes. Likewise, the zodiac is composed of six archetypal pairs of opposites­—Aries/Libra, Taurus/Scorpio, Gemini/Sagittarius, Cancer/Capricorn, Leo/Aquarius, and Virgo/Pisces—which, once integrated, enables the individual to find a new center, a point of balance that allows for harmony both within and without. "

MacBeth - did he not understand the archetypes ? Did he not find the point of origin ? Did he find harmony in himself ?

Hiya Anon2, sorry if I have appeared ignorant, I have not had time to check the link and comment further. I will have over the next couple of days. Things are a bit hectic at the moment.

Two systems at play:
1. Mechanical - gain possession of all experiences; all permissible
2. Dynamic - rational choice to be made......beware Karma though

Anon2, you are presenting a metaphysical quandry. My current circumstances don't allow those as options albeit I do flounder between both. I would think though, that not too long ago, I lived my life on a dynamic basis. Now I suffer the Karma.

I am not too sure Anon2, but I think you sometimes comment on Rangers football "blogs". It may not have been you, but I got a lot of hits from a comment left on such on Bill McMurdo's blog some years ago. As you know, I am interested in the symbology/ritual/magick surrounding the event(s). Anyway, there's a good one here, very well written, if you are not aware/are interested. Moon, you will maybe enjoy it too :

Maybe they should rename them Rangels

Oor Wullie's [Shakespeare] phrase fair/foul, foul/fair would be a description of system 1. But Wullie shows his understanding of both systems from'to be or not to be'......or more to the point 'to live and think or to live and not think' - that is the very real question.

Regards blog link, Atlas shrugged shows a leaning towards the creativity of humanity of system 2.
BM's website was good but seems to have stopped now.

Anon 2 - just got the Atlas Shrugged connection. Sorry, a bit slow on the uptake.

have you seen this - you MUST read it Newsspaceman Take good care always xx
http://chrisspivey.org/the-night-of-the-living-dead/