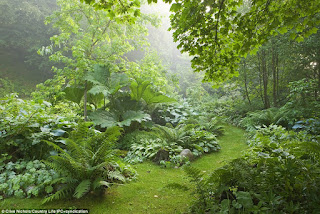 I noted the post-solstice burning of Aleister Crowley's old Loch Ness abode, Boleskine House, in my last offering, considering it potentially portentous given "the beast's" contention that the place was, in some manner, a hotbed of magickally harnessable energies.

Since then the weather in Scotland, especially the North East corner, has been horrendous. The Royal family have not been spared, Prince Charles' Birkhall garden, originally "constructed" by the Queen Mother, obliterated by floods. From the mail on line we read of how Charles considers that the River Muick, which flows through the place, "is the magic" and of how the Q.M. adored the "hermit" qualities of the haven. Furthermore, we learn of how the house itself, which has been spared, contains a toilet nicknamed Arthur's Seat, allegedly named after a favourite member of the Q.M.'s household.

In (free)masonry, the North East corner is highly symbolic, being the site of the cubic corner stone - "the most important stone in the whole edifice". Let us not forget either of how, after the Scottish independence referendum, Alex Salmond stated:

"The winds are blowing across Scotland and they're blowing very strongly, believe me, in the north east of Scotland.

'There's going to be a lion roaring tonight, a Scottish lion, and it's going to roar with a voice that no government of whatever political complexion is going to be able to ignore." 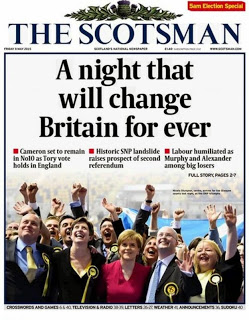 The Changelings and other fishy matters

A load of balls 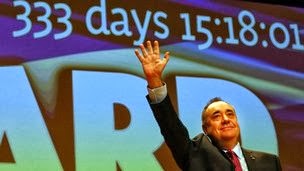 There's another Arthur's Seat in Scotland,  this one not a toilet but rather a lion-shaped extinct volcano close to the centre of Edinburgh. At it's foot sits the Scottish Parliament and historic Royal Holyrood Palace. On it's plug, or capstone, sits Edinburgh Castle which nowadays contains the alleged Stone of Destiny, which some claim is Jacob's Pillow Stone.

Royal Holyrood was founded by King David who, during encounter with a manic stag, made the sign of the cross and survived. The earliest claim of a Loch Ness monster is in a similar vein.

I'll just reiterate my long held theory that, like freemasonry in the past, Scotland is the geographical root of the forthcoming  new global order and that the solitary figurehead will begin his journey here, on the Stone of Destiny.

Whilst lastly, we read today that Tony Blair allegedly told Bill Clinton that Princess Diana's death was like a "star falling". See wiki - Lucifer - in that regard. 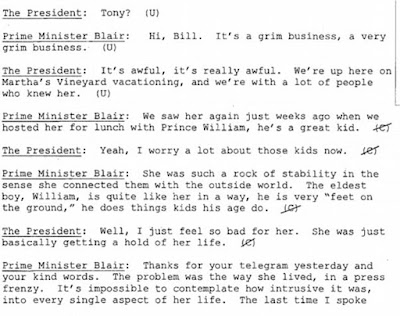 cheers
Posted by Newspaceman at 13:44

Um...I have some questions. I will attempt to address them as improperly as possibly, then check back and post whatever menagerie I can come up with. Hopefully it will suffice at being completely inadequate, and we can ...well, go from there.

Thanks, I will endeavor to answer them as inadequately as is feasible.

Hello Newspaceman
Happy New Year. Thanks so much for these articles especially the reference to the North East Corner. I lived there as a child near to Findhorn. Only now am I realising what a magickal place it is.

Have you heard of the StClairs and the Arcadians/Templars/Merovignians arriving in the NE Corner of Scotland after they were thrown out of France and Spain?
Act 1 http://watch.pair.com/death-phoenix.html

'Alleged Stone of Destiny'
A comment I couldn’t agree more with. I have spent many an hour researching The Stone. As did my father & Grandmother & great-grandmother.
I agree with them. The Stone was made of white marble & rests in exactly the same place Angus Og left it.

Curious. Bill had his own li'l house burning too

Haha! Awesome. I may have to link my question(s). They'll be mixed in with my normal "all over the freakin map" rambling, but you'll know them when you see them.
Thanks in advance for not responding. :)

Herewith, for your consideration, a video by ExplorerOne on the Dark Horse prophetic symbolism surrounding William during Christmas time last year.

A video by RussianVids Youtube Channel on the likelihood of Diana's death being staged.

Sabine I enjoyed visiting your blog. Thank you and much love xx

Hiya Anon 1.37 . Happy New Year too. We are all well, fingers a bit sore with the Christmas lego building - lego is not what it used to be ! My partners from Buckie/Findochty originally and I worked in Alford for a while on leaving school so I'm fairly acquainted with the area. Just after I wrote this post I realised that Alex Salmond's constituency gor hammered with the floods last Thursday. Thanks for the comment.

Anon 1.44, thanks for the link, I am aware of that possibility. There are a few Templar gravestones near me, and on the East and West coasts. There's a school of thought that the Templars were involved in the Battle Bannockburn, however some say it's nonsense. Alex Salmond described the battle as the "birthplace of modern Scotland" a couple of years ago (and we know what Scotland then birthed - hence the post). In the sidebar there's an article on the site mythomorph about the potential "Hermetic/astrological" situation at BB too. It' well worth a read. The link below is to one of my efforts :

Anon 1.56 - You are most probably correct, I believe it's all to do with ritual nowadays. The Queen has a bit of the alleged stone under her new carriage :

Anon 04.02 - Many thanks for that. It is curious. I am sure there were rumours about Crowley and one of the "modern" presidents, I forget at the moment, it will come back to me.

Sabine, many thanks. i have added your blog to the main page. I don'y get that much traffic, especially when I post so little but it may help in the grand scheme of things. Somehow, i get very very little via google searches, according to the blog traffic indicator thing, am not sure why.

Anyhow, thanks again to all. cheers

'...rumours about Crowley and one of the "modern" presidents...' Possibly the one about Babs being Crowley's daughter, making Dubya his grandson?