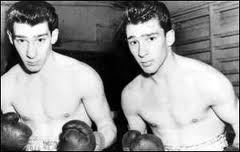 Continuing in the same vein as earlier in the week, we are told that the East End recreational facility which is being built to accommodate the 2012 London Olympics is to be named the Queen Elizabeth Olympic Park from 2013, just after the site reopens following the games.

After-event development plans include five "family-focused neighbourhoods" with associated amenities, including hydroponic, Babylonian style, "hanging gardens set 30ft above ground", schools, nurseries, and faith places. (BBC 7/10) . 2012 is of course the Queen's Diamond Jubilee year and her last in office (in my opinion), see Things are not always as they seem for more on the forthcoming "raising of the King of Zion" ritual.

Also mainpaged on the BBC's site the same day was a story about East End gangsters, the Kray twins, and their donation to a Welsh colliery landslip disaster (Aberfan, 116 children died) help fund back in the '60's; the story being that a letter thanking the notorious criminal twins for their contribution is coming up for auction soon. A 20th century history expert, Dr. Martin Johnes, from Swansea University is noted as stating :

"Aberfan was one of the first human tragedies beamed on television in real time into people's living-rooms.

"The response, if you were to transpose it into modern times, could be likened to the death of Princess Diana.

"There was such an international out-pouring of sentiment, that it would have been more unusual if someone of the Krays' profile hadn't have made a very public contribution.
Winning hearts and minds ?

Glad you're back at it here ~ the news you share is so much more relevant than that of the msm.

It is a concern that you really put yourself at risk, with this info ~ but imo, all of us that seek and share the truth, are on borrowed time anyway. That said ~ I also believe there are forces greater than ourselves ~ that are protecting us ~ as we try to live and do what is right.

Thanks for the link to the grailcode site. It's got so much info ~ that I've only browsed it. One thing I disagree with, that I read on it ~ is regarding the jewish genealogy of Will being false ~ as I'm more of the persuasion that he really is cloned from 'the' blood. Fulfilling the prophecy of the abomination of desolation, in the temple ~ which refers, I believe ~ literally to Christ's body.

Speaking of cloning ~ a bit of trivia ~ that I found interesting ~ was when I recently learned that rh- blood, cannot be cloned. I've studied a lot about the traits of rh- bloodtype ~ and do believe that it is of a separate species. Also interesting, is that many people have the rh-, as well as the rh+. The rh+ is dominant ~ so they are a mix, which would be reflected as rh+. In fact, learning of my own family history ~ with rh- on my paternal aunt ~ it's very possible that I also have the rh-, as a recessive. That means both of my dad's parents must have had the rh-, though they may have tested as rh+. Also, since my dad tests as rh+, at least one of them would have been rh+ dominant. Not sure what that would make me?!?

Maybe more info than the readers here are interested in ~ but fascinating study to me.

Hiya, thanks. I try to keep posting although it is difficult at times. The risk does not factor into it for me, in my eyes it is humanity which lives on borrowed time. As you note, there are forces greater than ourselves. Doubtless.

Grailcode is a bit heavy going for me. I am a bit unsure about the cloning of Wills. I don't know too much about the practice in mammals but was Dolly the sheep not the same age as her mother - something the "scientists" had not expected. Where did the cloning material for Wills come from ?

When you write that rh blood cannot be cloned, you mean that human science has not found a way to clone that particular group yet ?

Let me know please, thanks again.

This is one of the sources I've seen regarding rh- not being able to be cloned. It also lists many other traits which may be more common amongst those of rh- bloodtype. http://www.rhnegativeregistry.com/traits-of-rh-negative-individuals.html

I like using the Wycliffe Bible for study ~ and am very averse to the kjv. If you use an online study tool, such as studylight.org ~ and search for words such as kenite, knyt, knytte, and various other spellings of this word ~ you may notice how it seems to refer to 'people' who may be of the rh- bloodtype. The diffrenet spellings are primarily used to denote various positions of hierarchy ~ frequently translated in other versions as different military offices, which very much obscures correct understanding of their relationship. These words were 'not' used in describing the original hebrews ~ except when they began having children outside of their 'race'. There are lots of physical characteristics given of these people, in the Bible. The way in which translations since the kjv, have obscured this ~ might almost seem 'intentional'?!?

Hiya thanks for the info, I had a look. The possibility that Wills is cloned interests me, however I would need some background as to how and why this happened to be able to progress any further along this line. I would be especially interested to know what the cloning material was and how it had been stored. Can you provide any more background please.

Actually Joye Pugh's website has a lot of interesting info about this ~ and she recommends your site, which is how I found it.

The shroud of turin is a strong possibility for this ~ and the history channel has done a great documentary about it ~ including an analysis of what the person on the shroud looked like. His features seem to be anatomically consistent with William. It is fascinating to see the face they came up witrh ~ and compare it side by side with Will ~ especially when he had the beard.

As for prophecy ~ again, he fits in every respect I've found ~ even all those obscure and hard to understand descriptions, such as animal's, etc. In fact, if anyone knows of any Scripture's related to the anti-christ, which they believe could 'not' be applied to William, I'd be very curious to know what they are. But I believe that the more you know of Scripture, the more obvious it is that he fits it to a tee ~ once you know to look at him.

I've never understood prophecy much, before this year, and also never believed in 'conspiracy theory' stuff. But my eyes (or perhaps I should say 3rd eye?) seem to have been opened this year ~ in ways of which I was heretofore ignorant.

Hiya, I not trying to fall out but we don't know for sure that the Shroud of Turin is Jesus, if that's what is implied. It could be some other dodger who is related to Wills and thus looks like him. The Royal families practice line breeding and in breeding, no doubt.

As regards conspiracy. Humans are busy building their own global prison (Zion/In Oz) for their children. It needs to be stopped.