Marrying under a rowan 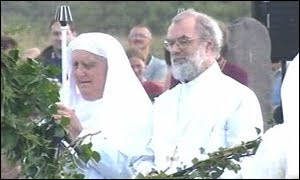 More details have emerged today about the forthcoming royal wedding (lest we forget) which tie in gently with the recent Archbishop of Canterbury/Queen/King James Bible remarks , namely that christo-druid Rowan will carry out the actual marrying part.

This is really not a surprise, according to the BBC, as the AoC has married all previous monarchs-to-be, however, there was "a suggestion that the Bishop of London - the Rt Rev Richard Chartres - might be chosen instead because he is close to Prince Charles and counselled him after the death of Diana ". Lest we forget.

Other information is released along with the above: a reminder of the engagement ring source, the time and the route, along with details that poor old Kate will have to make do with a car en route the service, the traditional glass carriage being deemed too lavish in these economically ravished times. They will, however, leave in a glass carriage together.

"It was said in England that this was the tree on which the Devil hanged his mother.[8]"

the guy NEXT to the druid christian uh priest whatever, now HE looks like a Pharisee

its not just the hat, its the weird black and white stick, like an anglo version of an egyptian 'was'

actually, he looks like Rodney Dangerfield as a Pharisee

now, if y'all come back again and tell me yes, this guy belongs to the local Pharisee Guild of Stonehengers or whatever, well, then i'm going on fng vacation

Ray, no idea who he is. Got photo from BBC but has vanished now. The whole mob of them are collectively named the Gorsedd, formed by a bogus-poet called Edwards Williams (There's a lot of Williams in Wales)

His pen name was Iolo Morganwg. Lolo is welsh for Edward; a telling quote from wiki:

Many years ago I saw a book that made a close connexion for Welsh and Henrew being related.

Lots of places in Wales are named after places in the Holyland.