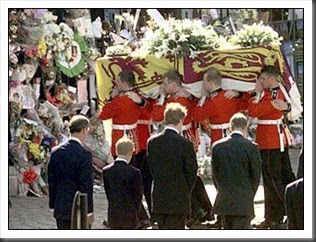 Coffins seem to be hot at the moment.

We had the eco-police Kennedy Stone Osiris tamarisk barge, closely followed by the Olympic "Ides of March billboard. Then today a front page story from the BBC: Safety fears for Prince Charles at Diana funeral, tells how a rival newspaper - the ultra dodgy, wikileaks facilitating Zionist Guardian - has published extracts from the diary of Tony Blair's media secretary, Alastair Campbell, in which he recalls the funeral of Diana and some sort of commotion over who, if anyone, would walk behind Princess Diana's Rampant Lion festooned coffin:

But Mr Campbell said there was doubt over whether Princes William and Harry would be willing to make the walk - as indeed they eventually did.

"William was refusing to speak to anyone and he was consumed by a total hatred of the media.

"It was pretty clear that he really felt strongly about the role of the media vis-a-vis his mother, and would not want to be doing anything that he felt was for them. He was being strong and clear about what he wanted.

"But as TB [Tony Blair] said, they were just one of the things he would have to deal with as king, and he'd need help. He felt that if he loved Diana as she had wanted him to, there was the chance he would set his mind on becoming king but having nothing to do with the rest of them."

Meanwhile, whilst on the subjects it is worth noting that Scotland and Dundee United footballer, David Goodwillie, who starred here last November in Cabbage Patch Dolls re sands of time, Osiris, his dismemered body and golden penis, has today been charged with rape, the alleged rampant and beastly offence taking place in Armadale at a New Year party.
Could his career be dead and buried, or will he rise again ? 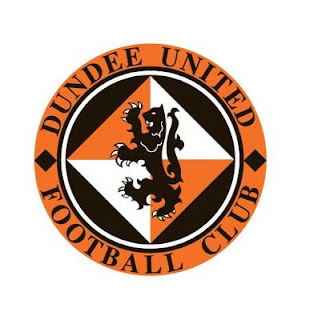 cheers
Posted by Newspaceman at 18:59