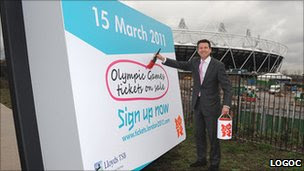 Most will know of the Ides of March, a day in Roman times dedicated to their war god Mars, perhaps best remembered through "Shakespeare's" Julius Caesar play, the Roman general assassinated on that date back in 44BC after being forewarned by a soothsayer of his impending and savage murder.

This year's 15th March has been chosen by the London Olympic 2012 organisers as the date that the 6.6 million tickets will go on sale for what chairman, Lord Coe, described, Billy Smart's Circus style, as the "greatest show on earth".


Maybe I have been thinking too much about resurrections given Mark Kennedy/ Stone (allegedly born 7/7/69) and "his" Osiris resonating Tamarisk barge, as noted yesterday, but is that not a coffin like shape surrounding the ominous date in the above billboard display; to the left of the crown shaped stadium.

Whatever, it should indeed be some show.

See too No bones about it, re light/illumination Olympic ritual from December.

Posted by Newspaceman at 11:56

It does. Blue as well, and Osiris' coffin floated.

The Clash [ of civilisations?]

Cheers moon. According to the Scotland on Sunday, Mark Kennedy set up two businesses after he left the police last year (assuming he really has), the first called Tokra Ltd, the second Black Star High Access.

Seemingly tokra are a fictional alien race in a tv show called Stargate SG1; black star was the name for Saturn in ancient Judae.

From wiki re tokra (well worth a look):

Biologically, the Tok'ra are the same species as the Goa'uld, though they are opposed to them in every way; their name "Tok'ra" literally means "against Ra," though it has gained the figurative meaning "resistance".

it is good catch, and the photo angle is such that the coffin emerges from one of the crown's (t)horns or pyramids

Mark Kennedy, so m/ark plus the caneadach (sp?) head-wound surname of ritual-sacrifice context, downard etc -- note the head-wound to a female public official in phoenix this week, an event w/heavy "intervention" signatures

the wounded woman is currently re-arising

acacias are associated with the osiric casket/masonry, the ark of the covenant, and the crown of thorns (triangles atop olympic stadium)

"Biologically, the Tok'ra are the same species as the Goa'uld, though they are opposed to them in every way; their name "Tok'ra" literally means "against Ra"

yeah well like i said, reminded me of branson lol!

""And the beast which I saw was like a leopard, and his feet were like those of a bear, and his mouth like the mouth of a lion. And the dragon gave him his power and his throne and great authority. 3 And I saw one of his heads as if it had been slain, and his fatal wound was healed. And the whole earth was amazed and followed after the beast," (Rev. 13:2,3)."

that passage was the first thing i thought of, AF

the image of our own Phantastic Pharaoh also came to mind, for the congresswoman was certainly "one of his heads"

Giffords was/is a very iconic representation of the ideopolitical beast system that dominates the planet in biblical "endtimes" -- insiders report that she was fast-tracked, slated for big things ... perhaps even a 2012 or 2016 presidential run