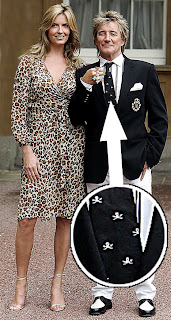 Yesterday, our Queen had a busy day. In the morning, there was all the furore over the BBC; in the afternoon, she attended a 1st World War memorial service in Belgium.

One can only marvel at the output of HRH, given that on glancing through todays free Metro "newspaper" it transpires that she also managed to give the esteemed Scottish crooner, Mr Rod Stewart, a CBE at Buckingham Palace. We recently saw Rod at the Princess Diana concert at Wembley.
Mr Stewart shunned the traditional morning suit apparel and instead opted for a pair of white Ralph Lauren strides and black Dolce and Gabbaba jacket teamed with a white shirt with black stripes and similar two tone footwear. Most importantly though, we are told "His black tie was patterned with white skull and crossbone pirate motifs."

Could this be anything to do with the shady American freemasonic 322 Skull and Bones society.
Especially given his scottish Stewart connection.

I leave you to ponder. 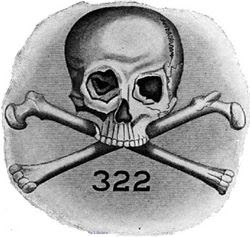 http://en.wikipedia.org/wiki/Skull_and_Bones
Posted by Newspaceman at 11:38

Yes it could. Rod Stewart is definately on payroll.