My head is bubbling with all this Glencoe massacre, freemasonry, William of Orange balls, so I thought I would perhaps lighten my load by meeting the realms of art, something which totally disinterests me but seems to appeal to many. Broaden my horizons so to speak, get out of the can.

I noted the up and coming anatomical Da Vinci exhibition at Holyrood Palace - where the Queen historically met the Pope before he took stock with disgraced Cardinal O' Brien for lunch and prayers over St. Andrew's bones - just last month (Palmistry), but it does not start until 2nd August.

There's an exhibition on at Leith though, by a Frank To, which has been "inspired by Dante's Divine Comedy". Apparently each of the paintings reflects the character of a Glasgow subway station. It all seems a bit dark to me, not comical at all, especially Frank's vision of Hell. Plus, it looks like most of the work is on the BBC site already, so what's the point ?

Maybe I will leave my new hobby until 4th October as it appears that an exhibition of Andy Warhol's work is to go on show at the Scottish Parliament building, which incidentally is only the throw of a stone from Royal Holyrood Palace. It's about a mile from there to Edinburgh Castle and the SOD (Stone of Destiny). According to the Scotland on Sunday the showcase promises to be fit for a king, with portrayals of the Queen, a series of screen prints depicting the JFK assassination, iconic "hammer and sickle" depictions, and a "devilish" Richard Nixon.

Unfortunately though, I note from here, that "The hammer and sickle symbol of Communism was adopted from Grand Orient Freemasonry, according to John Daniel, author of Scarlet and the Beast. In 1877, when French Grand Orient Freemasonry declared "God is dead", and "there is no God but humanity", they replaced the 'G' that had traditionally been at the center of the Masonic Square and Compass symbol with a hammer and sickle. "Notice that the symbol forms the letter 'G' backwards, which is symbolic of the negation of God and is French Freemasonry's declaration of atheism."

That's not forgetting James Shelby Downard and his JFK assassination "freemasonry" theories which are on the side bar.

And I wonder too if there will be any of Warhol's "Campbell's" works, and if they have any hidden significance in terms of the Glencoe massacre. 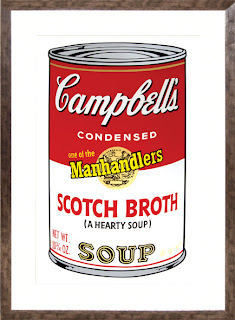 Back to the drawing board it is then.

"Even in his most well known paintings, Warhol has shown how the most unlikely commercial imagery may conceal peculiar symbols of occult significance, subliminal inscriptions, often overlooked as decorative and trademark vanities. Nonetheless, it seems as though Warhol scholars have long overlooked the possibility that with his presentation of the disposable and the trivial, Warhol was also revealing the subtle prevalence of esoteric symbolism within these objects."...

"Let us take for example the familiar screen prints of the Campbell’s Soup-Can. The simple soup-can, gilt with fleur-de-lis, depicts within in its central seal the Promethean embellishment of the “Worker,” held aloft by an angel and bearing the torch of enlightenment. The fleur-de-lis, being the herald of the first Frankish dynasts, chosen by the Merovingian King Clovis I, has long been the insignia of the Blood Royal, the supposed descendents of Christ. The label’s central image is a replica of the golden medal awarded to Campbell’s Soup at the Paris Exposition of 1900. The “worker” depicted in the image is identical to Paul Manfield’s Prometheus sculpture, in Rockefeller Plaza, with the reclining figure encircled by the belt of the Zodiac. It is the torch held by Prometheus that symbolizes the transmission of gnosis and mankind’s possession of the seven liberal arts and sciences of Masonic lore..... "

...Andy Warhol died on Billy Name’s birthday, February 22nd, exactly one month after the opening of his Last Supper exhibition in Milan..

Note that 22/2 is the date that Prince William appeared in Hello magazine, issue 1111.

Posted by Newspaceman at 17:11

"In 1877, when French Grand Orient Freemasonry declared 'God is dead', and 'there is no God but humanity', they replaced the 'G' that had traditionally been at the center of the Masonic Square and Compass symbol with a hammer and sickle."

This explains a lot.

Hiya aangirfan, there's a lot of info on the same subject in the "further reading box" to the right.

Terrorism and the Illuminati.

And, of course, the Campbell soup owners and Glencoe......

The Campbell's Sang Real may relate to the 'G' in the Masonic sign......one of the Tribes of Israel [Gad].
The other Tribe (King !) represented by the M(a)cDonalds and their 'M' sign.....the Magdalene......again trying to grasp the ownership of the Royal child/lineage/blood.

Fun & (Commonwealth) games, eh ?!!
Eventually the two want to become one in a communist (bee)hive.

Cheers Anon 2 - I think also that one of the symbols of the Merovingians is the bee as well as the fleur-de-lis.

There's quite a lot of info in the bottom link, the one with the esoteric viewpoint on Warhol, regarding Da Vinci. If I had read it first I would have included it.


thanks, good to hear from you.