Yesterday, the day after the full moon, saw Prince William, pregnant Kate, and Harry attend the inauguration of the Warner Bros Studios in Hertfordshire. There they fooled around with Harry Potter wands and Wills got to sit in the Dark Knight Batmobile. (mail on line)


Wills noted during his "formal opening speech" that "To be honest, I’m over the moon just to have seen the real Batmobile and Batpod – you don’t do baby seats for those cars, do you, by any chance"

I've written about Aleister Crowley recently. Crowley believed, probably quite rightly, that "Every nursery rime contains profound magical secrets which are open to every one who has made a study of the correspondences of the Holy Qabalah. To puzzle out an imaginary meaning for this "nonsense" sets one thinking of the mysteries". He actually wrote a whole chapter in one of his books (here) which dissected various rhymes and his interpretation of their allegorical meanings.

It got me thinking about Wills' comment, what with all the Harry Potter magic, but, unfortunately, Aleister never covered Hey Diddle Diddle, The Cat and the Fiddle, The Cow jumped over the Moon, The little dog laughed to see such Craft, And the Dish ran away with the Spoon.

Others though believe that Hey Diddle is "connected with Hathor worship; that it refers to various constellations (Taurus, Canis minor, the Big Dipper etc.); that it describes the Flight from Egypt...". Though others would say that was nonsense.  (wiki)

Hathor is an ancient Egyptian goddess who personified the the principles of joy, feminine love, and motherhood. She was one of the most important and popular deities throughout the history of Ancient Egypt. Hathor was worshipped by Royalty and common people alike....In other roles she was  goddess of music, dance, foreign lands and fertility who helped women in childbirth...Hathor's identity as a cow, perhaps depicted as such on the Narmer Palette, meant that she became identified with another ancient cow-goddess of fertility, Bat. (wiki) 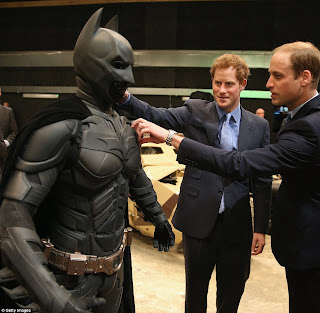 It surely is a mystery.

cheers
Posted by Newspaceman at 13:10

I did laugh at the photos of this today. Have you seen The Sun's coverage of it? It's quite telling. There is a picture of the Prince, his allegedly half-blood-prince-red-headed-brother, and Kate. They are in their wand-waving stance and below them is a picture of their Harry Potter protagonists doubles... Harry Potter (mark of the beast on his forehead, aka the antichrist),Ron Weasly (red head, best man),and Harmione Granger (I have no idea but could represent anything you've mentioned here plus the name of Hermes).

And what can you say about 'Wands'? There's a lot of info here...
http://www.esotericarchives.com/wands/

Hiya Marie, when "Potter" finished the HP series she signed a bust of Hermes to celebrate. It was in the Balmoral Hotel, Edinburgh.

Note also the link below :

Jimmy Savile's cigar was a wand.

ps, got a great picture of savile, just waiting for an excuse to post.

"Hey diddle diddle! the cat and the fiddle!
The cow jumped over the moon."

You are too kind.