As most no doubt know, Baroness Margaret Thatcher passed away yesterday. Some celebrated with street parties and suchlike. Whatever one thinks about her, she certainly was shrewd, selling the British public things that they already owned - British Gas, British Telecom etc.

She was known as the iron lady, whether that was alchemical in terms of a forthcoming alleged golden age I do not know, but "she" did head a social revolution during her role as Prime Minister .

She passed away at the Ritz hotel, it's address is 150 Piccadilly. Note the No 22 on the golden eagle topped pillars in the image above, taken as the ambulance left with her corpse. There's probably a rational explanation.

According to the mail on line, a chorus of Wizard of Oz song "Ding dong the witch is dead" could be heard at the Glasgow party, "among the popping of champagne corks". Furthermore, the song looks likely to be propelled into the top 40 chart.

The funeral is next Wednesday, apparently the police are on high alert for demonstrations and rioting.

Which reminds me somewhat of December 2010 and the "student riots", when Prince Charles' car was "attacked" en route the Palladium for the Royal Variety Performance. The images below are from then, pay close attention to the billboard advertisements on the theatre. 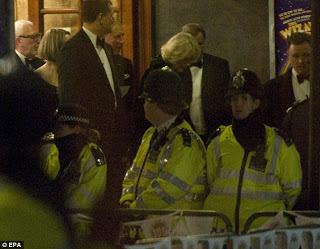 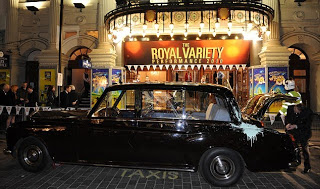 Note the 22, and double 11, are digits which pop up here with remarkable regularity.

The Wizard gets in everywhere !

I just read your last three posts. I'm speechless at the synchronized OZ stuff going on! I read lots of blogs in the sync community and I guess everybody has their own opinion about this, but I'm curious what you think:
Is there a grand wizard behind the curtain (who has control of the media and stuff). Is there a wizard who really does practice some sort of satanic rituals where he gets help from demons? Did the wizard set things in motion at a ritual (like the madonna Super Bowl), and everything else is falling into place? Or are we (the entire population), helping co-create this stuff because its fed to us in the media?
The syncs that line up with what is going on go back for years, and can be referenced in songs, movies from decades ago! And it seems to be coming to a culmination lately.
What do you think is going on? Please be specific.
thank you!
one of your long time readers :)

Frank, he seems to, cheers

Anon, my understanding is that Oz represents man "being" God. When Dorothy etc visit the wizard - the wee man pulling the levers behind the curtain - he tells them they already have what they need/want within them. It's allegorical

Given that humans appear to have a need to worship some entity, indeed always have, and that current religious worship is dwindling, a new "man centred" religion will spring up. Unfortuantely, it seems to be riddled with black magic of many descriptions.

We are helping, yes because "we" watch and thus perform to a certain extent in the rituals. Plus, few do much about the occult side of things and see them as normal.

My overall understanding is that this is not God's Kingdom we create, or indeed have created - it is the global kingdom for a man who will pretend/appear to be god-like and will be worshipped.

It's like the house is built and all that is happening now is the interior design, hanginf the pictures so to speak. The rest is constructed.