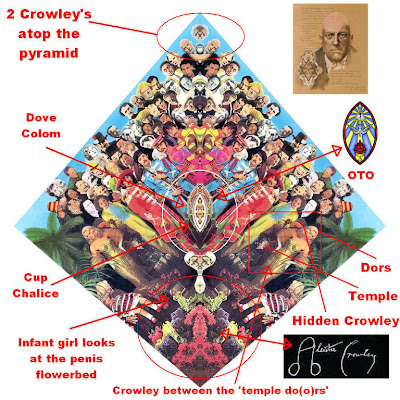 Following on from yesterday's post, I copied the above image from Icke's forum. Not that I am usually there but it popped up in a google search. It's self explanatory in terms of the Ordo Templi Orientis (OTO), The Beatles' Sgt Pepper album cover artwork, and indeed Shirley Temple:

"The following is a 'mirrored' image of the Sgt Pepper original cover...a mirror placed down the diagonal centre (corner to corner i think?) of the album cover...it produces a homage to Crowley & OTO.

I don't know what sort of tech they used to acheive this effect...but the original positioning of all the people & props present (in the standard cover image) is obviously key.

Crowley at the apex of the pyramid...recall it was via the great pyramid that he received the initial message from wife ..."they're waiting for you" which began the contact for the dictation of the Book of Law."


Re mind control and the alleged creation of alters (see Fritz Springmeier), it is interesting to note this report from the BBC regarding an ongoing court case where the woman lost control and stabbed her partner 24 times. It appears that she had been abused as a child and this caused a "dissociative episode". The clinical psychologist, Dr. McNally, when explaining the theory of dissociation noted :  "If a child can't physically remove itself then mentally it will dissociate given certain circumstances.It becomes a coping mechanism when you perceive a high level of threat."

aangirfan  on the Geldolf's, Mk etc.

Pseudo Occult Media on broken mirrors in the fashion industry.
Posted by Newspaceman at 09:25

Apparently hitler was waiting in the wings for this photo ,a look a like obviously but he was pulled at the last minute pardon the pun

Interesting to see Crowley up there at the top!

Just to cover both angles -

cheers to both, thanks.