I covered the Prince William and Kate visit to Scotland yesterday in a couple of posts; admittedly the table tennis connection to the Kings of Leon seemed rather spurious, however maybe not.

Andy was a pupil at Dunblane Primary when the massacre took place. Some say there was a "freemasonic" cover up in regard to the mass-murder (Aangirfan - Dunblane shootings - paedophile ring). Notwithstanding the valuable information in the link, it does seem strange to me that Order of the Thistle holder, Lord Cullen, who oversaw the legal enquiry, allegedly received a letter noting this masonic ruse dated 11th April (the 101st day of the year) and that the school gymnasium - scene of the massacre - was demolished on 11th April. In  my posts yesterday, I noted the potential connection between William of Orange and Prince William's visit, given the wildfire in Fort William, the Glencoe massacre and Wills' skype call to the Netherlands. Just to briefly reiterate, the Glencoe massacre was a blood sacrifice to William of Orange and his House of Stuart wife Mary - who became joint sovereigns of the United Kingdom on, yes you've guessed it, 11th April. It was also the date Prince William got his RAF "wings" and, indeed, the date that the Stone of Destiny was returned to Arbroath Abbey after repatriation from England on Christmas Day 1950.

Also yesterday in Scotland another VIP appearance. Prime Minister, David Cameron, visited a Trident nuclear missile submarine - HMS Victorius - where he glowed over jobs, growth and Typhoon military aircraft. He's no doubt got an underground safe-house. Curiously, three Typhoons were due to carry out a fly-by in honour of Prince William's visit. (BBC News) 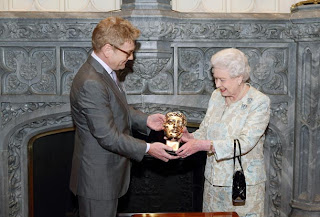 Yesterday also saw the Baftas, awards for British film and television. It was held at Windsor Castle, the Queen receiving an "honorary" award for her "James Bond" skyfall role in the Olympic opening ceremony. Baftas chairman, John Willis, claimed she was the most memorable Bond girl ever.  Remember that the movie, Skyfall, had links with Glencoe, whilst bearing in mind the aforementioned massacre and ex Glencoe resident, necrophiliac Jimmy Savile - who appears to have dug deep links with the monarchy. (Numerical symbols) (BBC News)


I'm not quite finished yet. According to today's Edinburgh Evening News, there was a "daring raid" at Beaverbrooks jewellers yesterday, part of the haul being Omega watches. The headline -  Thieves climb jewellers for James Bond watches. Note that El was allegedly the ancient's name for Saturn  (Horsemeat of the Apocalypse) ; I noted the potential influence of the ringed planet with the Lockerbie bombing (see link) just last month. Note too that one of the trial judges was thistle loving Lord Cullen and that the trial was held in Holland. He also covered  Piper Alpha.

Meanwhile there's also Orange/Protestant/William of Orange loving Glasgow Rangers football club. They resurrected last year after liquidation, something I found quite symbolic given their history and the foreseeable future. I  mentioned it in January - The most powerful family in the world - whist yesterday the shady goings on appear to have reignited. The Sun - Green : I shafted Whyte to get Gers.

To close, today Wills visits a stately home before heading over the border to see a nuclear submarine - not "Cameron's" one. Whilst the Queen, perhaps in a prophetic spirit of Scottish colonisation, visits the Mars factory with the Duke of Edinburgh. (BBC News)


Also re Rangers - Ger-kill and hide

Note too North Korea, Kim Jong-un and his 10th April deadline - here.
Posted by Newspaceman at 13:43

Beaverbrook, worth a look

Cheers Moon. Had a look, many thanks. Mars' headquarters is in Slough admittedly, although it is Dundee Road.