None of the media-anticipated violence yesterday at Thatcher's funeral although, according to various sources, the Queen was nearly struck by a sword wielded by the Lord Mayor of London, Roger Gifford. Mr Gifford is a father of six from Scotland. (here)

The mail on line reports that the Boston explosives were intended to act as "Claymore anti personnel devices". A Claymore is a Scottish sword.

In West, close to Waco and it's infamous massacre in 1993, a huge fertilizer plant explosion. The BBC are reporting that it was "like a tornado" Shades of the wicked witch; see previous, recent, posts. 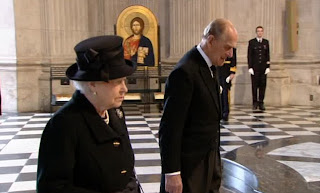 Also see Holmes is where the heart is, re James "Joker" Holmes, Dame Kelly Holmes, the Olympics, and the "power and significance of the Monarch" .

and Things are not always as they seem, re the Beijing Olympic "Wizard of Oz" handover ceremony.

UPDATE - the fertilizer explosion is being attributed to ammonia which the Romans called "salt of Amun".  That's Amun as in the Egyptian deity Amun-Ra.  (wiki - Amun)  (wiki - ammonia) 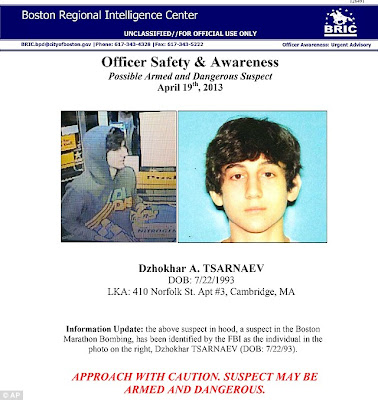 Posted by Newspaceman at 09:14

This is all highly strange stuff!

It is Marie, maybe I am reading too much into it. Although the BBC's "tornado" headline appeared after I had already posted.

Note also re Oz - Rolf Harris. Nothing new but now in the mainstream media.

It's even stranger given current events, the Boston "suspects" located in Watertown. Given that it is water that kills the wicked witch in the Oz movie.

Apparently it's a "fluid" situation as per the BBC live text

Boston and Grantham are in Lincolnshire, linking the Marathon with Maggie.

The name derives from St.Botolph who has a church , afeectionately known as Botolph's Stump, somewhat macabre given the missing limbs of the runners.

Wiki tells us that for the last 130 years the Stump has only had 26 bells while in WW2 Lincolnshire was known as 'Bomber County' for its plethora of airbases.

Good shout Moon. If we look at James Shelby Downard's KK33, his references to Boston re freemasonry and the taverns, and his thoughts that the JFK assassination was "Greening Ritualism", then it's strange that the USA's Boston is named after the UK's and that the "perpetrators" of the marathon massacre lived in Norfolk Street - given that the UK's is directly intersected by that famous "green man " - Robin Hood's Walk.

Apparently the main photograph of the suspect leaving the marathon scene was taken by a David Green.

Lockerbie - the plane hit Sherwood Crescent - you will get the forest connection.

That's as in the UK's Boston has a Norfolk Street too.

See Breivik and "his" Oz-low (Oslo) bombings re that.

Well well well but what does it all mean.Let me tell you nothing zip nada.the world is run by a collection of inbred nutcases.However I seriously doubt any group could plan all of this.Therefore this is happening random chaos theory end of goodbye

Order from chaos - See Albert Pike's : Morals and Dogmas. You "doubt any group could plan this" . Laughable. Truly laughable.

Suspect found in a boat @ 67 Franklin Street. Boats and water, fluid situations, Franklin as the masonic President, Frank Morgan that plays the Wizard in the Wiz of Oz plus some other characters.

If random theory is a theory, as it's name suggests, then anon is suggesting that the author has "proved" the theory ?

A man and a woman , both 26 , killed. Police called to Red Lion Street, Boston.

Very high powered Aangirfan. It pops up again in my previous post courtesy the image of Jimmy Savile and Thatcher. The little handwritten note to the side shows Savile's no. 22 address.

Am working on a post about it, left a comment on the Aangirfan blog re Sweet Caroline, the Boston Red-sox's anthem. Apparently the crowds were singing it along with USA on Friday evening. Neil Diamond wrote it about JFK's daughter, caroline, when she was 11.

ps am still getting to grips with anon's comment that the world is "run" by a collection of inbred nutters, yet they are incapable of this. Bizarre.

Also am reminded with tributes to Sandy Hook at Boston, is that Aurora's Encore won the GRand National at 66/1.

If not 'inbred nutters' but the type of guy or gal who has just gotta follow that super-computer's orders no matter how strange they get - its to save the planet and humanity.

Also there's a great swathe of people who don't care about anything but going along with whatever shite's handed to them, I mean they watch Britain's Got Talent, and some jokers even made it - desperate.

She acted in 'OZ' some years back.

My thoughts on the whole mind control are in line with your's Moon, in regard to follwing orders. Hence Thatcher. Plus I seen it at various places where I have been employed previously. If you try point out any moral difficulties with say selling a policy which provides the "seller" ot his emplyer with huge commissions - see low cost endowment mortgages - you are looked at as a fruitcase. Neverthless, I was right about endowments at the time, it later transpired.

I had never heard of Zooey but note from wiki that: "She played DG, the lead in the Sci Fi Channel miniseries Tin Man, a re-imagined science fiction version of The Wonderful Wizard of Oz, which aired in December 2007"

I see a tornado hit Fredricksburg - a place with deep, historic, masonic connections - on Friday night at 6.36pm

Too much synchronicity is bad for you.