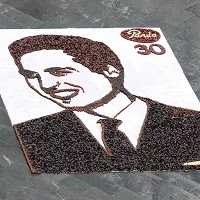 First up Prince William, two stories about him. A giant piece of liquorice has been made by manufacturers Panda, slightly early, to commemorate his forthcoming 30th birthday on the sun drenched solstice. The other regards his skiing trip with the in-laws, apparently a belated Valentines gift given his recent military service in Argentina. Both of these dubiously connect to Scotland; given all the fuss last week about the Edinburgh Zoo pandas and their unsuccessful 2 day long mating event, plus Glasgow Rangers (Billy Boys/William of Orange) and their descent into administration on Valentines Day - the ramifications of which should be finalised early this week allowing a phoenix club to rise from the debt-strewn ashes.

The Queen also starred today, alongside Camilla, the latter being appointed a Dame Grand Cross by the former, in recognition of her many royal engagements at home and abroad over the last 7 years.

Last up is Prince Harry who apparently spent his Easter in Romania with Transylvanian Count, Tibor Kalnoky. The mail-online takes the opportunity to remind us that "it has been claimed that Britain’s Royal Family can be traced to Vlad the Impaler, the real-life ruler who inspired Transylvania’s Count Dracula vampire legend", although it does not say who made the claim. The further reading box to the right contains a text, From Transylvania to Tunbridge Wells, in which the author claims, amongst many other things, that the whole mythos of the vampire stems from the consumption of menstrual blood in order to gain "second sight". (There's allsorts in there). Which I suppose, scarily, takes us back to the Edinburgh Zoo pandas in a round-about sort of way.

Mail on line - Pandas fail to mate.
Posted by Newspaceman at 18:01

Newspaceman, you may be interested in a very small but very important update at the start of the Fagan piece in prince williams occulted numbers:

Okay i cant resist it! On the day that palace intruder Michael Fagan visited the queen Elizabeth in her bedroom and had a ten minute chat just so happened to be her 11,111 day as queen.

The legendary hunter Jim Corbett, a resident of Treetops at the time, wrote the now famous lines in the visitors' log book:

July 9 happens to be the aniversary day of the visitation of saint Elizabeth.

Thanks Kal, that is most interesting. Sorry if my comment yesterday sounded curt, but it was actually correct in terms of posts (obviously there are some never published).

Tomorrow, 11th April, may be interesting, given previous year's performances.

Newspaceman, It was a sync showing you the way. Ive noted for some time that invariably most of the number syncs seem to happen from the end of the bible. End days?

Dont worry, and me also for these are tetchy times!

Prince William was 5555.5555 days old on Diana's funeral or exactly 8 million minutes or 480 million seconds on the dot plus minus 20 seconds of Diana's coffin passing him.

Thats half the 11,111 days old Q.E. was the day Michael Fagan broke into her bedroom and chatted to her.