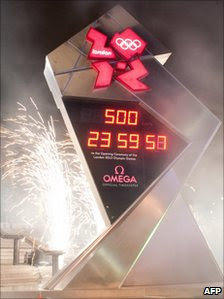 The Olympic "Zion" clock was set to life in Trafalgar Square yesterday evening marking 500 days to go until the games commencement. Tickets went on sale today - the Ides of March - a curious coffin shape adorning the billboard advertisment back in January (here) .

Today the Omega timepiece died soon after midday, the display as per image below. 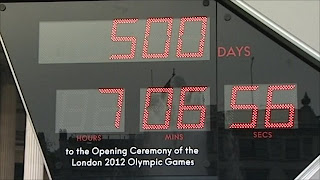 Posted by Newspaceman at 16:45

Are you sure you put the right link?? Thought you meant
http://newspaceman.blogspot.com/2011/01/bloodlines.html

Cheers Jimbo, maybe too 656 was the closest possible. Eleven seconds earlier would have been 7 7 7. Maybe that speaks volumes too. All very ominous indeed.

Michael, cheers, good to hear from you.

Rapahel, thanks, have changed it, had little time to "compile" post.

Eerie indeed. Would have never thought of that. As for the shape of the clock I see it rather as a ribbon, as in ribbon awareness, or as the Greek letter Alpha. Now a black ribbon means mourning and accidents while a silver ribbon means brain disabilities and schizophrenia among other things.
On the other hand if you rotate the image by 90 degrees counterclockwise you will stumble upon the Greek letter Alpha which, together with omega sends a very meaningful message. At Revelation 22:13 God is quoted to have said "I am Alpha and Omega, the beginning and the end, the first and the last"

darnit i KNEW that number was there, stared at the photo stupidly for half an hour yesterday till i finally got frustrated and clicked away

"Cheers Jimbo, maybe too 656 was the closest possible"

yup thats why the "alternate format" was used

we already knew all this jive was wrapping up, so i find the photo (and Jimbo's solution) comforting -- the Omega (end time) clock was stopped precisely at that revelatory point

to me, it doesnt suggest a subliminal advertisement for their beest system, but an anonymous announcement that "we've got your number"

The ORIGINAL BBC story (earlier than the one posted by Spaceman) says:

People have a six-week window to apply for tickets on the London 2012 website. "

It didn't really show up in my quote but I thought it was quite ironic that "6.6" and "six" would be mentioned when talking about the clock.

Thanks Jimbo, appreciated. This is a nice quote from your link:

Ms Ennis, who is aiming for her first Olympic gold at London 2012, said: "We all know that having a home Olympics is unique but the countdown clock is just bringing it all to light. It is all so exciting

"We all know that having a home Olympics is unique but the countdown clock is just bringing it all to light."

even a stopped clock is right once a millennium


"It is all so exciting"

not quite the same w/o christians n lions, but, patience...

oh My God, check this out:

sar is Hebrew for prince. Hebrew word 117 is Majestic (of kings, princes, seas and trees).

Last time 117 hit the news big was last year the day pw was awarded his wings on the day of the longest solar eclipse in the next thousand years - Obama awarded the banks a 117 billion dollar fine and "OSS 117 lost in Rio" the french movie premiered in the Uk that day.

OSS 117 lost in Rio has a sword fighting scene set on the arms of the massive Christ the redeemer statue.

Of course after the 2012 olympics which were chosen in singapore in a place with coordinate 117, by the 117th IOC comittee. Just as well they could dial 117 in emergency for that is the emergency code of Singapore.

I predicted to my friends that Rio would win the chalenge cos of that statue!

ps the skies of europe were closed off cos of the iceland volcano with the face of a demon for 3 days in homage of our young prince the day after he was awarded his wings.

Kal, I have read your post, - you are saying you are heaven sent to tell humans about Prince William via numerical calculations involving birth date and the distance between your birthplace and Scone.

Newspaceman, indeed this is what i think is the case. Yet are you aware that knowhere did i actualy say that in the stone of scone article? I see you come to the same conclusion as i, so tell me do you think this is the case?

Jimbo, who the holy moly are you?? I take it the great Jimbo has not read my new article and examined the strange numbers and coincidences? If you are capable of fathoming it you are most welcome.

Considering the strange interconections between my names and numbers and the bethel/Dan/Laish/Shiloh connections and the fact that the crown is the figurehead.

It is no coincidence that i, an Iraqi born near Scone is here to bear witness to the Britain's work done in Iraq over the past two decades. I have been appraising it and my desission stands.

I also have a special Ace card that i have not included in the article that further indicates proof of destiny.

Kal - I know you. You know me as Mister Typo.

Lol mr typo! My god i should have known it was you. Funny i imagined you bald with a round head too.

So you dont like my blog then? You know i had to laugh when you posted this:

"MAJOR SYNC FIND!
This is such an important find that I didn't want it to get lost in the shuffle, so I created it's own thread. I apologize in advance to anyone who may be upset over starting a new thread.

This morning, I may have found the grand-daddy of all synch finds. Why it never occurred to anyone to look before is beyond me. How do I know no one has printed it before? I Googled it. I double checked.

And yes, Kal Dani, please use this on your website!"

And then you admitted you were lying due to not having slept for days.

The sad truth of the matter is that ever sinced i chastised mr typo for posting a draw your own offensive cartoon of Mohamad at the instigation of Fox news he has had a bee in his bonnet to add to the fact that he is also a failed "pw is the AC" ex website owner.

He started the thread off with a hearty "Hey I'll go first, I aint 'fraid no muslims.." and posted an artisticaly and technicaly void piece of crap cartoon that was offensive in that he sees Arab's and Mohamad as being into dollars, petrol and camels when obviously that is more the Saudi royaltys loves.

You can see this piece of crap straight out of the neocon/zionist textbook that he posted here:


He and some zionist poster took a fierce online bludgeoning from your humble servant here and why not? Only since Americans and zionist jews have been sneaking about Iraq that there is sectarian mayhem.

No one in Iraq disses another religions prophet whether Christian, Muslem or Jew.

Jimbo aka mr typo is a Christian. Shame.

Ever sinse Mr typo aka Jimbo aka numerous other nom de plumes has been stalking me abround the internet and ambushing me like Kato does the pink panther, its a shame really the poor chap has a fractured psyche and needs medical attention.

Newspaceman, can you log his IP address and trace it then contact the relevant authorities (i reccomend the Texas rangers) of his whereabouts so that they may section him and make him whole again?

i dont get u

@Jimbo Eerie indeed. Would have never thought of that. As for the shape of the clock I see it rather as a ribbon, as in ribbon awareness, or as the Greek letter Alpha. Now a black ribbon means mourning and accidents while a silver ribbon means brain disabilities and schizophrenia among other things. On the other hand if you rotate the image by 90 degrees counterclockwise you will stumble upon the Greek letter Alpha which, together with omega sends a very meaningful message. At Revelation 22:13 God is quoted to have said "I am Alpha and Omega, the beginning and the end, the first and the last"