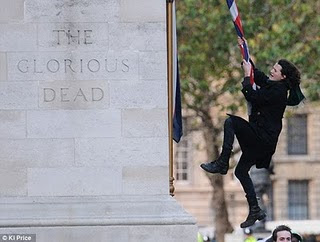 Back in December, Charlie Gilmour, son of Pink Floyd's Dave, swung pendulously on the cenotaph Union Jack before allegedly steaming into the Prince Charles Royal Variety Show expedition convoy, en route the Wizard of Oz flyer festooned Palladium. It was the day of the riots. Since then he has been in court for the latter offence, whilst a charge of stealing a mannequin leg was dropped.

On Wednesday, it was announced that Kate Middleton will travel to the forthcoming wedding in the same Rolls Royce as Charlie allegedly attacked.

On Friday, Gilmour was back up in court although not much happened, he will return on the 26th April, 3 days before the knot tying event.

On Saturday, more riots in London, apparently all focused around the "Zion" Olympic clock. From the BBC:

Police Commander Bob Broadhurst: "All was peaceful for quite a long while but then for some reason one of them made an attack on the Olympic [countdown] clock, we moved in to make an arrest, the next minute they're attacking us and they're trying to attack and damage the Olympic clock in Trafalgar Square."

Protester "Sophie": All of a sudden about 10-20 Met police came storming down the steps of the National Gallery, ran straight to the Olympic clock. "I have never seen such a fast escalation of violence in my life. Everything just kicked off, glass everywhere, police hitting people, people being dragged across the floor. I just can't believe it." 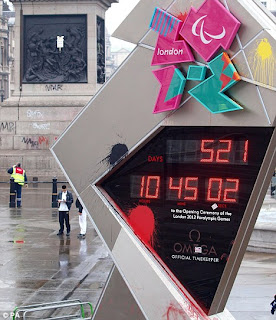 Bottom image from, Police fear anti-monarchist anarchists plan to disrupt Royal Wedding, features clock after attack, note paint bomb stains. I thought the clock was meant to count down from 500 but...
BBC- Charlie Gilmour court case.
Posted by Newspaceman at 07:15

not a random target ... we realized the Queen was a NewspacemanFan, but yikes, WHODA THUNK?!

"Saturday's arrests were largely for a variety of public order offences, they said. In addition, 66 people were reported to have been injured"

the 66 stands out given our prior discussion of the two sixes on the clockface, and the totalling of the clockface numbers

biblically, six is oft considered the "number of man"

cheers spaceman, where you gonna send them next? ;O)

at that time (circa 1870) rite HQ were in rome, berlin, and charleston south carolina (later, D.C.)

they called their syncretic form the Supreme Rite or Palladian Rite

the lodges of this Rite were/are called Palladian Lodges, or Triangles

Thanks Ray, I was looking into the Palladium rites last week (an alter to Mithras was uncovered near here), Fritz Springmeier touches on them in his Be Wise as Serpents.

It is indeed quite strange how the clock was the focus and catalyst.

ps sorry about any unanswered comments, will get rectified later tonight.

Perhaps these thugs are backed by Iran , regarding the Zion c[l]ock.

Loughner has to be evaluated mentally by April 29th, the evaluation to be carried out in Springfield , Missouri.

'Springfield's nickname is The Queen City of the Ozarks. It is also known as The Cultural Center of the Ozarks, The Gateway to the Ozarks, and The Birthplace of Route 66.'

@ jimbo
that link
www.hindustantimes.com/ETs-and-UFOs-may-attend-royal-wedding/Article1-680053.aspx
does not work
?

Works for me. But try this instead.

Link you supplied works fine for me too, the BBC have also covered the UFO angle.

haha pretty weird. It's a head-scratcher to realize MJ is wound up in the King Arthur ball of twine... it's just an odd thing to contemplate.

thank you for the embedded link

i dont think any 1 needs to speculate about the presence of extraterrestrials at the Royal wedding....

just look at the pics in that article of prince William and Prince Phillip....

THEY are extraterrestrials look at them!!

Branson's spaceport in New Mexico lies on 33degrees at Truth Or Consequences .

Lossiemouth's at 57 degrees and together they make 90 which is in keeping with the Tesselators.

Yep - all that Royal blood is the same. You've heard of 'blue bloods?'

Actually, the word endeavor means "one's duty" (in actuality to owe a debt and to pay the debt); this can take several different paths but there is certainly 'the beast' path that seems obvious to this onlooker.

April 29th is when Jared Loughner has to have his mental health evaluation completed by.