Twin dog miracle stories have reared their heads in the BBC news over the last couple of days, the first from Australia regarding a pooch, named Sophie Tucker after the "famous" US entertainer, which unfortunately fell overboard as her owners sailed off the coast of Queensland last November. Amazingly the K9, an Australian cattle dog, managed to swim across shark infested waters to the remote St. Bees island where she survived on a diet of baby goats for four months.

The second is closer to home, for me anyway, Scotland, where we read of an elderly springer spaniel, Oliver, which survived for 37 days in the hills after running off from his owners during a walk near Glen Etive, eventually being found "8 miles as the crow flies, 44* miles by road", on the other side of Ben Fhionnlaidh.

Stripping these stories to the bone yields some incredible synchronicities if one is of the opinion that the new world order currently being created is freemasonically orientated, and that our British Royal Family is close to the top of the pyramid; so close in fact that Prince William is to be the Rex Mundi, or King of the World, and that we are being constantly warned to this fact through esoteric teachings from a higher source.

Going back to the initial Oz herding-dog story; the location Queensland which speaks for itself, on the eleventh month of the year, 11 always a favorite with these Knights Templar reincarnates, but, surely, the clinchers are the St. Bees Island and the diet of baby goats, bearing in mind recent posts throwing up the Jamie Oliver G20 goats cheese Stanley Kubrick connection, and Goat/Pan/Lucifer/Baphomet worship practiced by those who inspire to enslave humanity totally. On the bees front, I would draw readers attention to this article, Freemasonry and Bees, published by the Grand Lodge of British Columbia, and attach a small quotation for your perusal:

The bee and the hive have long been symbols of industry and regeneration, wisdom and obedience, with a place in Egyption, Roman and Christian symbolism. The hive is often seen in Masonic illustrations of the 18th and 19th century and both Clovis and Napoleon adopted the bee as their symbol. Although "the bee was among the Egyptians the symbol of an obedient people, because, says Horapollo, 'of all insects, the bee alone had a king 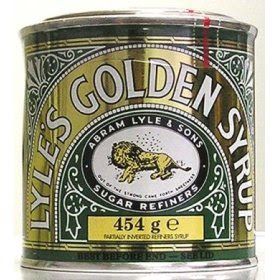 Lets quickly move on to the second featured story, the Scottish one. Whilst at first glance it seems unpromising,with some digging into the location, Glen Etive and Loch Etive, from wikipedia we note:

Glen Etive (Scottish Gaelic: Gleann Eite) is a glen in the Highlands of Scotland. The River Etive rises on the peaks surrounding Rannoch Moor, with several tributary streams coming together at the Kings House Hotel, an old inn on the A82 road at the head of Glen Coe

Just seaward of the mouth of the loch is Dunstaffnage Castle. This was a stronghold of the kingdom of Dál Riata until the 9th century, and possibly its centre at one time. It is believed to have held the Stone of Destiny before its transfer to Scone Palace.

Surmising the subliminals, we tipple both the King and Glencoe, as both were very recently noted in previous posts with regards to the code name for the recent G20 police operation and the Scotland/Rangers football sacrifice; whilst the two shepherds twins nicely with the two dog tales and the Crimond helicopter disaster "Lord is my Shepherd" synch, with yet again a clincher - the Stone of Destiny appearance - because for sure Prince William (the oldest Billy Goat Gruff - we, collectively, are the troll - think about it) will be crowned upon it. 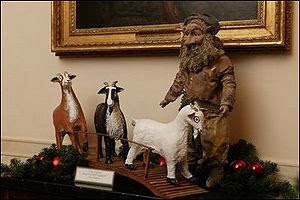 Just before I go, it needs stated that the Scottish rooted Millwall (The Lions) Football Club colour wearing man who died during the police G20 Glencoe operation was named as Ian Tomlinson, his stepson, Paul King, telling the BBC he "wants answers". Note from the map below, that the police assault took place at the end of Royal Exchange Passage. 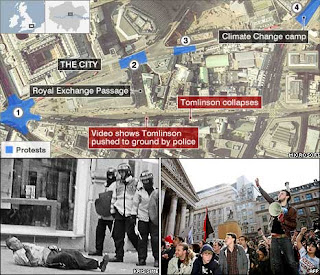 *aferrismoon re more on 44, and Barack.

Posted by Newspaceman at 15:19

Hiya newspaceman, is the goat headed Baphomet not meant to represent Sophia, or wisdom, in Gnostic philosophy, which ties in well with Sophie Tucker.

Also, her last film was called the Joker is Wild

all the best, Archibald Pelago

Wow this is interesting stuff.

A strong set of stories these past posts.
REX = a famous name for dogs I believe.
St.Bees is also in Cumbria too.

The 'Goody' saga seems to be something wierd , not that long ago she was a 'racist' , now she reminds the country that cancer shouldn't be forgotten.

Strange connexions twixt 'Stanley the blade' and the Goats cheese of Childwickbury. Almost smacks of 'sacrifice', now adding the 'kids' the dog ate.
Begins to feel a bit like Isaac , Rachel, Jacob and Esau, a mess of pottage, some goat stew and the loss of birthright.
Isaac[laugher] nearly got sacrificed himself and Jacob[supplanter;heel] resonates the Scottish lineage.
I read somewhere that the British people descend from Joseph, while the Royalty descends from Judah.
The Coat of Arms with Lion and Unicorn = Judah and Joseph. The Unicorn was a kind of wild Ox seen in profile giving it a one-horned look.
The Lion = the star Regulus [in Leo] while the Unicorn = star Aldebaran in taurus.

Wow this is interesting stuff. www.theivesinthenight.blogspot.com