We touched on  reverse psychology propaganda  in the post Childsplay.

On Wednesday, 11/6, it was announced that Rowling, has given a million pounds to the anti-Scottish independence (Better Together) campaign. She could have kept it quiet, one imagines, however she detailed her rationale for the donation on her website (mail on line):

However, I also know that there is a fringe of Nationalists who like to demonise anyone who is not blindly and unquestionably pro-independence and I suspect, notwithstanding the fact that I’ve lived in Scotland for 21 years and plan  to remain here for the rest of my life, that they might judge me ‘insufficiently Scottish’ to have a valid view.
It is true that I was born in the West Country and grew up on the Welsh border and, while I have Scottish blood on my mother’s side, I also have English, French and Flemish ancestry.
However, when people try to make this debate about the purity of your lineage, things start getting a little Death Eaterish for my taste.
I was not sure what Death Eaterish meant, however the BBC have kindly compiled an article about Wednesday's event - What does "Death Eaterish" mean:

"She likened some of them to the scariest characters in her books, saying that, when trying to "make this debate about the purity of your lineage, things start getting a little Death Eaterish for my taste".

The Death Eaters are a group of wizards described as "pure-blood" supremacists led by the evil Lord Voldemort, Potter's arch-enemy. They are contemptuous of "half-bloods" and human "muggles".


The inner circle of Death Eaters - who behave without regard to wizarding law - have dark marks emblazoned on their arm, denoting membership.

"To use the D-word is pretty much as low as you can go in the Harry Potter fandom," says expert John Granger. "It will really hit a nerve with JK Rowling's fans. She is trying to get back at the people who say she's not really Scottish and shouldn't intervene in the debate."

The thing being is that I cannot recall Rowling voicing an opinion on Scottish independence  prior to her "donation", thus looking again at the segment of her rationale as above, when she writes "suspect.... that they might judge me insufficiently Scottish", and then follows up with "when people try to make this debate about the purity of your lineage", the point is they have not. It is Rowling who has brought to life the "blood purity/ Death Eaterish angle", no one else. 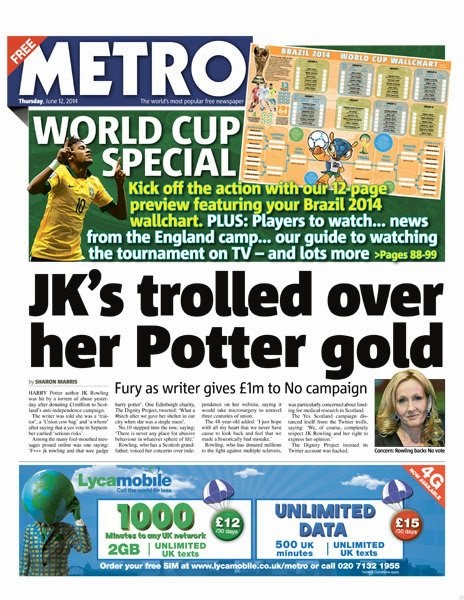 Remember though that the Death Eaters were led by Lord Voldermort. According to wiki, they try to create a "new order" through the "Ministry of Magic". Their main enemy is the "Order of the Phoenix".

Remember too, that many Scottish people would find Rowling's comments distasteful. They might class them in the same vein as those of the fairly unlikeable, Hillary Clinton, who has expressed a desire that the Scots vote no.

Scott Lucas, professor of American Studies at Birmingham University, seems to agree with myself in terms of the reverse-psychology being played out here. From today's BBC :

Hillary Clinton doesn't make off-the-cuff remarks, and she certainly doesn't do so on foreign affairs.

The fact that President Obama, and indeed other European politicians, have come out vocally against Scottish independence really points to a coordination among policy-makers on both sides of the Atlantic who basically are saying Scotland should remain part of Britain and, in turn, part of the EU.

It will be interesting to see how Scottish voters react, because my perception is that - far from pushing Scottish voters to say 'we have to stay part of Britain' - I think they may assert their own, as it were, independence from these politicians by voting in the referendum precisely to come out of Britain.

Which indeed is the game plan. An independent Scotland as the symbolic cornerstone of a New World Order; an act of alchemical magick.
Some food for thought is that many Potter fans believe that "Voldermort's" grave is located in Edinburgh's Greyfriars Churchyard (Dark Arts). From wiki - History of the Jews in Scotland :

Like many Christian nations, medieval Scots claimed a Biblical connection. The Declaration of Arbroath (6 April 1320) appealed to Pope John XXII for recognition of Scotland's status as an independent, sovereign state and asserted its right to use military action when considered unjustly attacked. It was sealed by fifty-one magnates and nobles. It is still periodically referenced by British Israelitists, because the text asserts that in the eyes of God:

The National Covenant was signed at Greyfriars.

Biblical promises about the land of Israel were never intended to be taken literally, or as applying to a defined geographical territory...
The 'promised land' in the Bible is not a place, so much as a metaphor of how things ought to be among the people of God. This 'promised land' can be found - or built - anywhere...

Back in the 1940's a "conspiracy theorist" called Comyns Beaumont proposed that Edinburgh was the "real" Jerusalem and that Edinburgh Castle fitted the Biblical description of Zion and the Citadel. Allegedly, the rights to his books are owned/controlled by the CIA. One wonders who controls them.

Are we saying that the leader of the death-eaters, Voldemort, is Salmond himself ? That their enemy is the 'order of the Phoenix' - re-born, matriarchal - note, Salmond didn't meet with The Dalai Lama. The Poenix will rise again......what in Scotland has been 'down' and about to rise again ?????

Here's my thoughts for what they are worth.

Rowling is an occultist/magickian/hermeticist, first and foremost. She perhaps had some help with the Potter series. Her sigining the bust of Hermes @ The Balmoral Hotel to commemorate finishing the last book surely leads one to believe that.

The elite like to remain "pure bloods" whilst encouraging us - through many mediums - to become "half bloods". Although their own bloodline is hardly "pure".

Perhaps it is a forward looking strategy, but Salmond and Rowling are well "in on it", the whole referendum is panto; bread and circus.

The answer to your last question is "religion|" - well something new to worship.

I am going to go out on a limb and say she is throwing good money after bad. Nationalism is rising in every country where the native population is being over run by mass immigration, and I think there can only be a ripple effect in Scotland with regards to independence. One can dream anyways...

TNS,
Hermes - thrice the hero - takes into account an amalgamation of both the matriarchal (Rowling) and patriarchal (anti-rebirth, Salmond).
The 'people' have no need for the 'new' religion but that's the plan......all together now, as one and equal (individualism out the window).

Hiya MB, first things first, she's got plenty money to throw, plus the donation is likely to be tax deductable/ tax mitigation.

Secondly, she's had plenty publicity out of the whole matter. It's still in the papers today.

Remember her "anonymous" crime book that no one bought. Till suddenly her identity was revealed. Then sales exploded.

The thing about Scottish nationalism is that it is not so much about immigration or multi- culturalism, it's probably more about a deep rooted dislike of the English. Honestly.

Hiya Anon 2, sorry, thanks too.