Back in June 2009, four-toed Liam Gallagher, then of the band Oasis, visited Edinburgh. He hung about the Royal Mile area before his gig and declared the city to be "Beautiful, amazing, fucking Biblical". (Edinburgh Evening News)

Last week, Liam "opened" the Glastonbury festival with his new band, Beady Eye, including the track, Second bite of the Apple, in their performance. I noted the Rolling Stones, Sympathy for the Devil, pyramid phoenix ritual in Satan's Slaves. Often one sees an eye at the top of a pyramid.

This week sees  HM the Queen's annual, ritual, pilgrimage to Scotland's capital city - she stays at Holyrood Palace at the foot of the Royal Mile, whilst at the top of the street sits Edinburgh Castle, which itself sits upon the volcanic plug of lion-like volcano, Arthur's Seat. Within Edinburgh Castle is the Stone of Destiny, which some claim to be Jacob's Pillow Stone.

Last weekend saw an Orange/Loyalist march take place in Edinburgh along with military parades and flypasts for the annual Armed Services Day. After the event, violence exploded on the Royal Mile, football casuals from the once Catholic, Hibernian football club, ambushing rivals from Protestant William of Orange "loyal", Glasgow Rangers and Heart of Midlothian. The trouble began outside the Mitre Bar. The Edinburgh Evening News calls it a "military operation" 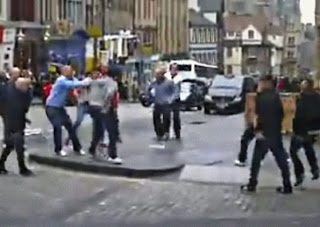 A mitre is a "a traditional, ceremonial head-dress of ancient Jewish high priests and of bishops and some other clergy in Christian Churches". (wiki)

Another report concerning Saturday's loyalist march from the Evening News notes of how Hollie Croan, a staff member at the Whiski Bar (which, incidentally, Liam visited), noticed an "unusual high level of drunkards" in the area "with people sitting all up the street, spewing (vomiting) everywhere. It was pandemonium".

also see my post Window Dressing re the Royal Mile, Nigel Farage and more "violence".
Posted by Newspaceman at 17:54