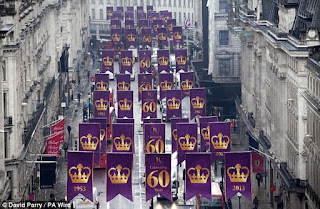 Yesterday's mail on line reports on how London's Regent Street is marking the imminent Queen's coronation "celebrations" by means of 189 purple and gold flags.

My understanding is that the "elite" often use numbers in their rituals. This can be seen by means of freemasonry, for example, where numbers - as symbols - are deeply embedded in their craft.

For example, if we turn back in time to 2008, the 27th of March to be specific, we saw what appeared to be a ritual, when  1122 police  carried out an "army style" raid on the North London borough of Finsbury Park in a crackdown on drug dealers and petty criminals. The same day, in football club Arsenal's stadium - only a very short distance away - Gordon Brown met then French President, Sarkozy,  for a press conference (Daily express) (BBC news) :

Speaking to reporters on the pitch ahead of formal talks, Mr Brown announced a joint British-Franco initiative to help to bring education to 16 million children in Africa.

There's the JFK assassination on 22/11 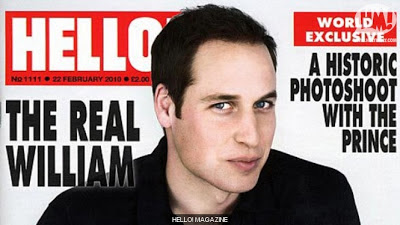 Uri Geller is infatuated with the digits double eleven. Uri bought Lamb Island in the Firth of Forth close to Edinburgh, as he believes returning Egyptian Princess, Scota, stashed her loot there. He purchased it on 11/2/2010. (Mutton dressed as lamb)

Glasgow Rangers football club, a very long saga, still not completed. Glasgow Rangers supporters are generally Protestant/Presbyterian and like to remember William of Orange. They went into administration in, let's say, suspicious circumstances. A Mr. Craig Whyte lodged papers at court to announce this fact, on 13th February 2012. On the same date in 1692 we saw the Glencoe Massacre, some sort of blood sacrifice to William and his House of Stuart wife Mary, who had recently been made joint sovereigns of the United Kingdom, although their coronation was not until 11th April - the 101st day of the year. Going back to Rangers, there has been a lot of discourse diverting and ruse creating since then, under court reference P221/12. (11th April is also the date Prince William received his "wings" and the date the Stone of Destiny was returned to Arbroath Abbey after repatriation on Christms Day).

The Scottish Sun from today reports of how Craig Whyte has lodged further papers in a "last ditch bid to sue Rangers". Apparently he has submitted a 333 page dossier.

The 33 degrees of freemasonry

Oh, and whilst 189 flags might break down to a relatively innocuous, or maybe not, 3 cubed x7, it's binary equivalent is notable,  a palindromic 10111101.

Note, while on the subject of numbers and the 22, it is worth noticing the time of the Woolwich machete murder - 2.20pm. Then there's the Boston marathon, the FBI reports giving the time of first explosion at 11 minutes to three. Whilst, perhaps, there is some significance in masonic terms, given their third degree ritual, in the finding of Dzhokhar Tsarnaev on the Slip Away 2 by owner David Henneberry : "I got three steps up the ladder and rolled the shrink-wrap. I didn't expect to see anything, but I saw blood on the floor of the boat. A good amount of blood". (here).

More on Rangers and a possible other "sacrifice" - Ger-kill and hide.

Some say that purple and gold are the colours of Druids.
Posted by Newspaceman at 10:06

woolwich hoax, 22/5/2013...33
'and my skull smote off and exposed to the meridian sun' royal arch degree.
Woolwich is meridian.

Thanks for that. Nice work on your site. Look up 11th April - 101st day of year - re Dunblane and an anonymous letter to Cullen alleging "masonic" involvement. Same date the gymnasium was demolished. Same date Stone of Destiny was left at Arbroath. Same date Prince Wills got wings. Same date William of Orange and HoS wife Mary made joint sovereigns of UK (see Glencoe massacre/Jimmy Savile in this regard too)