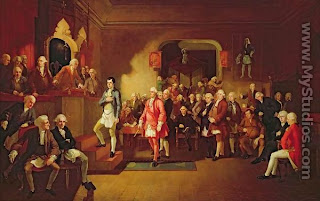 The Scotland on Sunday newspaper of last week carried an interesting essay by an Alistair Fraser, discussing our famous poet, Robert Burns, whilst suggesting that if he was alive today he would probably be languishing in jail, given modern "anti terror laws". It draws upon his radical, anti-government views together with his membership of the freemasons as rationale for the argument, noting the painting (as above) which depicts Burns at his investiture as the Bard of Scottish Craft Freemasonry at Kilwinning Lodge Number 0 - the mother lodge - on 1st March 1787.

The Lodge that is shown is one of the oldest and most esteemed, and at this time was known to be a hotbed of radicalism. There was, during this era, a strong connection between Freemasonry and radical politics; many thought that the principal architects of both the French and American revolutions had also been Freemasons.

The essay explains that although the painting of Burns and bunch of sixty brother Freemasons was carried out some fifty years after the event, it is not "entirely an invention", the artist making use of lodge minutes when deciding who to include in the depiction; apparently a rebellious, and titled, bunch they were. ( here for more details of the 60/better quality image)

Wednesday past, Burns' Day, was the day chosen by rebellious Scottish Prime Minister, Alex Salmond, to unveil his referendum vision, something the Scotsman newspaper called momentous. Alex later told of his referendum question for the Scottish people, along the line of : Do you agree Scotland should be independent ?

It's surely apparent that all these years ago, the "radicals", indeed even Burns, were potentially hoodwinked. 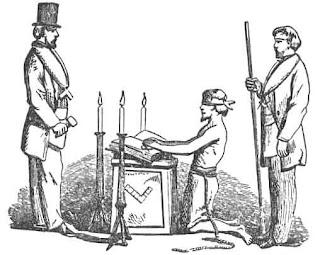 Posted by Newspaceman at 17:38