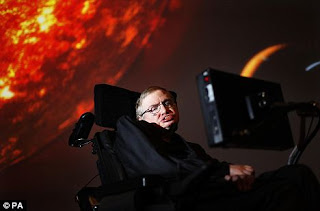 Urban myths are something rarely paid much attention to here at newspaceman. For example there's the Jimmy Saville one from ten or so years ago, where rumour had it that super-celebrity Jimmy, now deceased, was a necrophiliac, and indulged in some form of cadaver tampering. It went in one ear and out the other, at the time.

Then there's Stephen Hawking, the genius physicist, crippled with motor-neuron disease from age 21. Some say his disease stemmed from an ill advised attempt at time travelling. Now, as he approaches his 70th birthday, he has told how in order for the human race to survive, outer space must be colonised, and predicts that this will happen, although not in the next 100 years. Furthermore, he predicts that Earth will become uninhabitable within the next 1000 years, either through nuclear war or global warming.

This is music to my ears to a certain extent, given my own thoughts on how a one-world society is being created and indeed how colonisation (from Scotland and Ireland) could be seen to be the backbone of this world order and indeed a nod to the future.

And Jimmy Saville ? Well he passed away last November and was buried, after a three day celebration of his life, in a Tutankhamun-style golden coffin. Curiously it was tilted at a 45 degree angle "to enable him to see the sea". It was then encased in concrete "so that the grave couldn't and wouldn't be opened again". That should fix it. 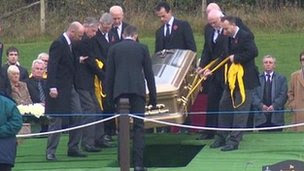 mail on line Hawking Mars story.
Posted by Newspaceman at 15:40

Re: Outer space travel and the possibility of colonising another planet - a good read is Dave McGowan's ' Wagging the Moondoggie'
[ if you've not already]

Hiya Moon, thanks, have not read it, will do shortly.

Anon, thanks, he maybe is unreliable as a seer, but for sure space-colonisation is the "elite" game plan. And fighting any aliens who turn up on the way. Plus genetic modifications. For sure humanity is being steered in a terrible direction, one does not need the gift of prophecy to acknowlege that. Which of course begs the question - is it full circle, are we, as humans, part of an alien colonisation programme ?

RAF Lossiemouth and Truth&Consequences, Arizona may be the first spaceports.

"The President of Virgin Galactic, Will Whitehorn stated in an interview with Space.co.uk on 29 April 2008 that the company was considering flying from RAF Lossiemouth during the summer months only."

Stephen the Hawk-King's possible experiment with time-travel sounds like the plot of the film 'Chemical Wedding' , based on a Crowley-like character and futuristic experiments.

Perhaps the use of low-orbit hardware to keep the 'flock' in check, who knows maybe a sign from the heavens - Lucifer [ at the Olympics]

2012 is full of stories that would fill up this blog. I miss your work and insight...

Hiya moon, I think Branson is definately interested in the Scottish angle, in that regard note that British PM David Cameron has mentioned the referendum (for "independence from England/United Kingdom") just today.

Going off topic a bit, it appears to me to be essential to the master strategy that this happens, given alchemy, ritual, & the breaking down of one's materials into their base parts, before attempting to form the "gold"; in this instance the gold being a New World Order (one world society)/ Global United Kingdom .

Bear in mind too the Lucifer/Prince William connection in terms of the Stone of Destiny and his "crowning", i.e. he will be crowned in Scotland first, then the world beckons. Bit like freemasonry.

I suppose Crowley too ties in with this given his abode at Loch Ness; again topically we heard last week that Loch Ness is indeed a gigantic "spirit level", make of that what you will -

Jeff, thanks, it is just sometimes very hard to motivate myself, and often there is little to write about other that repeating myself.

As you note though, 2012 should be the year it happens (certainly in terms of Prince William, Scotland, global financial meltdown, Royal Bank of Scotland) and maybe matters are just being saved up until then. At least I have noted my thoughts at this blog, albeit in a fairly haphazard manner, and can refer back to them when the time comes.

Well, well, smoke and fire, Mr. Saville has popped up in the media today, apparently he was under investigation regarding child sex abuse.

Off topic..
New movie set to be released in 2013: 'Burt Wonderstone'.
Burt of Scone? After the stone was stolen and broke in the process, it was repaired by Glasgow stonemason RoBERT/Burt Gray
Also weirdly enough "The film follows Las Vegas magician Burt Wonderstone (STEVE Carell) as he attempts to reunite with his former partner Anton Lovecraft (STEVE Buscemi) to take on dangerous street magician STEVE Haines (Jim Carrey)". Three Steves!

Washington phentermine 30mg black capsule phen375 adipex reviews phen375 adipex without doctor phen375 37.5 for sale online phen375 dosage information Again, Phentermine alone is not enough to combat obesity. It is important to adopt a healthy lifestyle making sure to keep a natural diet and a steady exercise routine (even if very small). So if you are clinically overweight and are in risk of serious illness, then Phentermine just might be the thing for you. phentermine 37.5 tablets without prescription Illinois And so, as I was passing from one shop window to the next, oblivious of what my mind had registered a few reflections back, little did I know that soon enough, I would be astounded at the sight of me. And what a sight! When did I get so .. yuk.. fat and old. Wasnt I the lad of Miami streets, a well traveled gentleman in touch with all that made him the man he was? Seemingly, from the image I was looking at, this gentleman had more of him than she should ever have had, and probably traveled way to many times to the local bakeries and other such delightful but oh so sinful places of heaven!