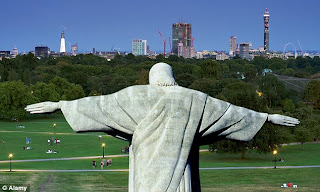 Potentially further confirming the 2012 Olympic's importance in regard to British Israel (Zion) and the raising of the King ritual, from the mail on line we note of how plans are afoot to install a replica of Rio de Janeiro's Christ the Redeemer statue on Primrose Hill - a famous London vantage point - in time for the games.

Meanwhile, confirming the link between the Vikings and our monarchy, again from the mail on line we note how Prince Charles intends to captain the 18 oared replica Viking longboat, Gloriana, in leading the 1000 vessel armada which is due to sail down the Thames on 3rd June to commemorate the Queen's Diamond Jubilee. (British Israel - The Hidden Hand behind the Kingdom of God on Earth deception).

Lastly, from the BBC, we note that famous film producer and artistic director , Danny Boyle, is working hard on the Olympic opening ceremony, the performance to be titled Isles of Wonder and to star nurses, schoolchildren, and a giant bell. In case you are wondering where the name comes from, it apparently relates to a speech made by Caliban in Shakespeare's Tempest, and is thus nothing to do with my must read 2008 Beijing Olympic handover analysis - Things are not always as they seem- where I supposed that the event was a parody on freemason and occultist, Frank Baum's, The Wonderful Wizard of Oz. In Oz being an anagram of Zion - which tells it's own story. 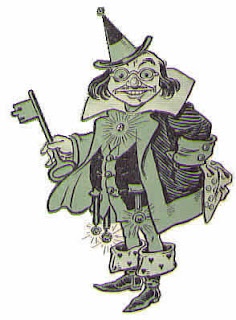 Top image - London from Primrose Hill (from mail on line link)
Bottom image: Guardian of the Gates of Emerald City - "Who rang that bell ? "
Posted by Newspaceman at 13:38

Thanks Jeff, if you look at this post, from 2010, when Prince Charles' vehicle was "attacked" by "rioters" en route the Palladium - second photo down, note the billboard advert to top right.

And yes, Elton is dodgy.

The Christ statue? In London? It ain't gonna happen. I think this is a sick joke or just a test for the public mind.
We all know at some point the 'tolerant' and 'peace-loving' will complain about how it's against their human rights to have to watch it.

The mother of Caliban is Sycorax, a powerful sorceress.

Olympi-kitsch - Jesus , doubtless to be surrounded by various Egyptian deities, coursing the Thames, perhaps even running a race or two.


Obvioiusly Alice in Wonderland is a children's story and this is the level of dialogue the Olympics will have with the public.

Hiya anon, thanks, that's what they said about the Olympic rings on Edinburgh Castle - will never happen - and "they" were right. Having said that, the rings are now to be sited on Edinburgh's Mound - on which the Castle itself sits. So, basically, ideas/seeds are being sowed - all the time, thats how it works. You will see that once the garden sprouts.

i wonder if the location has a history of druidism, etc . . .
sycorax, sorcery?

Cheers Ray, more of roses in my newest post. Don't have much idea about London at all.

There are lots of businesses around australia offering forklift coaching and also certification, nevertheless the last theory and practical tests ought to be evaluated using a Safework assessor in order to guarantee the license conforms with OHS rules. These are the sites where the used fork lift trucks get serviced and put together all over again for the used to experience the same thrill as earlier. This fixes the forklift platform to the truck and ensures forklift safety. There are chances that they might have purchased these equipments very recently and they are still in band new condition. It's imperative for one to check the part number meticulously to ensure that one doesn't receive the wrong part.