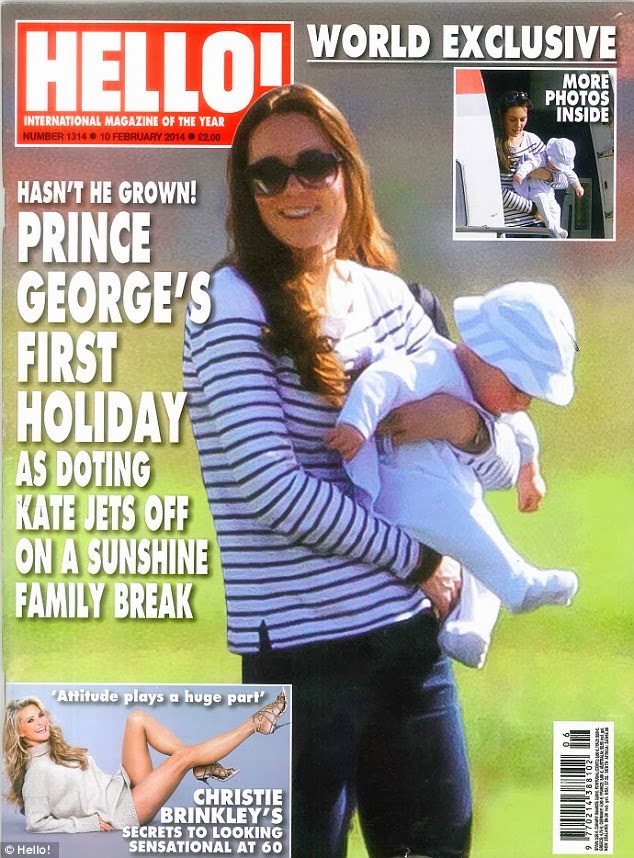 Great news. At last royal baby George has been spotted, en-route to the uber-private island of Mustique, the images taken by a "freelance photographer" appearing on the front cover of Hello magazine.

We recall almost four years ago, when a "dark" Prince William graced the front cover of the same magazine - issue 1111, dated 22/02/2010. It was the 1111, double eleven, that caught the attention then, with some claiming the numerals have an esoteric meaning - self-proclaimed CIA asset Uri Geller, for example, thrives on them. 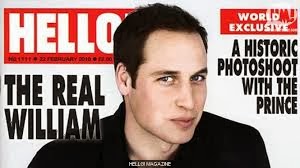 Here @newspaceman, as we often recount, Scottish independence, or perhaps just Scotland, appears dear to the elite. We often wonder if it's linked to the Knights Templar, their appearance up here many moons ago, and the subsequent spawning of freemasonry.

At the Battle of Bannockburn, Robert the Bruce allegedly received help from the Knights Templar to "overthrow" the English. Some "historians"  pour scorn on the "myth", citing no real evidence behind the legend, but then again, history is written by the victors and it was indeed the Scots who were victorious. Perhaps, it was part of the deal, so to speak, that the Templars were kept out of it.

Bannockburn is not forgotten, by any stretch of the imagination. For example, last week's BBC reports on how a three dimensional simulated "Battle Game" has been created at the Bannockburn visitor centre so that "people can walk away not just with extra knowledge, but with the experience and emotions of medieval battle." and that the techniques employed in it's development came from the movie Lord of the Rings.

The new feature is due to open on 01/03/14, which is a "clever" play on numbers if one ignores the zeros, given that the actual battle took place in the year 1314.

Note that back in 2012, it was widely reported that the independence referendum was to be held on the 24th June - the anniversary date of the battle - although this has now been altered.

In my last post I touched on Hermeticism, and the "as above, so below" dictum, in relation to planetary activity. From mythomorth, The Mystery of Bannockburn :

Perhaps no battle in history has been written about more passionately and at greater length.....Because at the heart of that battle has always lain a great mystery: how the enormously outnumbered Scots could have possibly won the day against a force described as “the greatest army that a king of England had ever commanded.”....Let’s now look up...

At dawn, in a sky already too bright to see him, Taurus the bull stands on the horizon, facing north. The uppermost stars of Orion the Hunter have just risen. Venus, a planet long associated with the pre-Christian Goddess, shines just north of Orion’s weapon, in a direct line with the bull’s lower horn. The sun rises in Gemini, the heavenly twins, followed by Jupiter, Mercury, and the moon in Cancer. Bringing up the rear is Leo the lion, with the war planet Mars below his breast. Accompanying Orion are his two hunting companions, Canis Major and Canis Minor—the Big Dog and the Little Dog.

In the pre-dawn darkness of June 24 the Scots quietly approach the English army, and succeed in drawing a battleline closer than English prudence should have allowed. As both sides face off, the Scots suddenly kneel in prayer. King Edward thinks they are kneeling to him for mercy while, behind him, Venus has already risen, followed by Orion and the sun. Could the widely reported event have been orchestrated to serve a double purpose—one prayer for the moment, one hidden for posterity?

We would add that the "pre-Christian Goddess" is not the only "diety" associated with Venus, and that some suggest that the "morning star" planet relates to Lucifer.

Could perhaps baby George's reappearance via Hello magazine also have been orchestrated to serve a "double purpose".

I am intriuged by the integrity of the images of "Kate", especially the main one with the grass in the background, if the pictures were taken as she disembarked a BA flight. as is suggested. mail on line
Posted by Newspaceman at 10:58

"Could perhaps baby George's reappearance via Hello magazine also have been orchestrated to serve a "double purpose"."

aye, and my auld granny will be wiring right into that first purpose next time she's at the shop.

you wonder if there's a sinister side to encouraging the elderly to live as long as medically possible, taking 30+ pills a day for example, even if they barely have any quality of life. no doubt it's a difficult subject, but passing naturally at a younger age with some grace doesn't seem to be on the cards for some reason.

"ye must survive and vegetate"

and just when you mention Lucifer, track 11 on Britney Spears' newest album is titled "Brightest Morning Star". Don't know if you caught that already, i only noticed it the other day.

Clarence, you have it bang on with the "sinister side", I know that from personal experience.Yet I have seen worse, believe it or not, MRSA, contracted in hospital, 6 months intensive care, new skin grown, still died.

You, or me, would not want to be in that state, having seen it.

Thus we would rather die "young", "gracefully", as you say.

But one must think most deeply about the implications...

The legs of the model in the bottom left are indicative of ' The Hanged Man ' Tarot card. the 14th character of the Hebrew Alephbeyt, and coresponding to letter ' M ' which relates to the element 'water'.