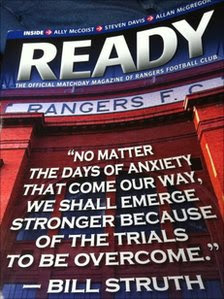 Today saw the Glasgow Rangers faithful - The Billy Boys - gather at Ibrox Park for the game against Kilmarnock, the club programme front page as imaged above, the quote from historic manager, Bill Struth, self explanatory and indeed, in my opinion, highly relevant to the grander scheme of matters: a one world totalitarian state ruled by a new King Billy, or maybe Arthur. Indeed, it is indeed the type of perverse motivational mantra one is likely to hear in respect of global financial Armageddon once the elite's grand alchemical dissolution of the current systems is completed, to pave the way for a one world currency/ one world order. Money makes the world go round.

Bear in mind that there is more to the ongoing saga than meets the eye, ex Chairman, Sir David Murray, selling the debt-ridden club last year to Mr. Whyte for a pound. Mr Whyte since then has withheld some £9 million of taxes from Her Majesty's Revenue and Customs, has "sold" four years advance season tickets for £24 million to a company called Ticketus, has placed the club into administration and has flown away. The administrators don't seem too sure where the money has gone but seem sure the club will emerge fitter and leaner. Sounds familiar, maybe Royal Bank of Scotland ?

Then there's also the sectarianism issues; being frank, a lot of people in Scotland take the Protestant/Catholic divide rather strongly, it is historic, although nowadays the "State" are clamping down hard on this type of behaviour, whether at the game or on-line it is no longer acceptable and is classed as hate crime. One has to watch what one writes, even in jest. The image below is from last year in relation to this.

Our game plan is, and has always been, simple. For us to live like Gods in "our" Garden of Eden with a dumbed down human-slave-worker race (you) to provide for us. To utilise the genetic and technological capabilities we already possess in this respect; furthermore to duplicate this process, eventually on other planets, slowly but surely colonising outer space. 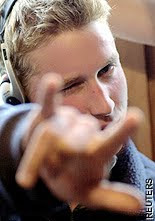 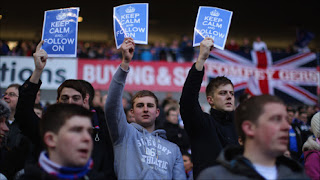