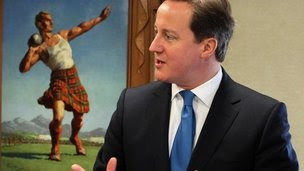 Thursday 16th saw British Prime Minister, David Cameron, flying North. His first stop was a porridge factory in Cupar, a town through which the river Eden flows, where he sampled the breakfast cuisine, with cream, before heading to Edinburgh for a St. Andrew's House located "independence" meeting with Scottish Prime Minister, Alex Salmond. The image above is from the factory visit, the kilted chap painting is an iconic advert for Scott's porridge oats. My understanding is that the subliminal message here, in terms of the original marketing is: eat our oats, get a big sack...; you get the drift. 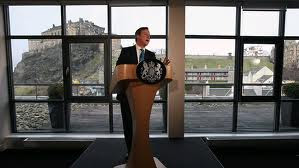 Now Heart of Midlothian supporting Alex, notwithstanding his reported "Where's the beef" question to Cameron, was additionally in the news that day, reason being that he apparently made comments regarding Glasgow Rangers (see previous post), stating that their bitter rivals, "Catholic" Glasgow Celtic, need their intense rivalry to "prosper". Craig Whyte appears to have shafted Rangers, whilst Celtic were seemingly raging (BBC report).