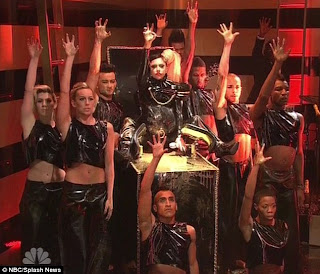 Just a week after her "Wills 'n Kate" Carlisle performance (here), and with the UK news still full of gagging orders, Lady Gaga appeared to again be up to some sort of alchemical based ritual malarkey, this time actually giving birth; to liquid gold, on American TV.

Instead of the coffin inspired Carlisle pregnancy entrance, she appeared from a caviar advertising pod of some description, as noted from the mail on line report:

The 25-year-old singer began her performance by emerging from a pod, emblazoned with the name Beluga Gagaviar No1 - a reference to the famous, and very expensive, brand of caviar.

Wearing a pair of PVC trousers and a cropped PVC blazer, which exposed her ultra-flat midriff, she launched into a typically energetic performance, singing all the vocals live as usual. Towards the end of the song her dancers surrounded her and, when she emerged from the scrum Gaga had acquired a huge bump.

She immediately headed from a mock hospital bed to the side of the stage where her dancers helped into a pair of stirrups, and she subsequently 'gave birth' to a gold liquid.

Meanwhile, Obama and wife arrived today in Ireland, closely following the footsteps of HM Queen last week. He arrived in the small village of Moneygall in the Offaly district, where he has roots, before indulging in a pint of Guinness, a drink affectionately known as black gold. 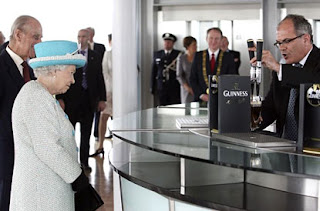 Note - It is worth pointing out too, that Alex Salmond, the Scottish National Party top-boy, today met with Chancellor, George Osborne, to discuss Scottish affairs, in particular a further levy on North Sea Oil, another black gold. Salmond's deputy leader is named, Nicola Sturgeon, as in caviar.

Email ThisBlogThis!Share to TwitterShare to FacebookShare to Pinterest
Labels: kl

liquid (alkhemical) gold, an old theme, heck the (phake) underground talk radio here in amerka was blabbering about this many years ago

speaking of many years ago, real original choreography there gags

I see Moneygall means 'foreigners thicket' which seems to go along with Obama's 'non-American status'.

Scotland looks like it'll get a fresh dusting of volcanic ash, possibly symbolic of a 'cover-up' or alternatively 'footprints' will become easier to discern.

I see Gaga went to 'Convent of the Sacred Heart' where other attendees include Caroline Kennedy, Paris Hilton, Eunice Kennedy Shriver and Gloria Vanderbilt, Ethel Kennedy.

Moon - yeah something fishy, King of Fish and Royal fish - seen the SNP symbol, on it's side. Out of Pisces, into Aquarius.

Watch fi' leprecorns , Obambam and Greenie Queenie holding both ends of tha' reinbow, away in the Emerald Isles.

I coulda sworn they weren't that big.

Where's Toto when you need him?

I accidentally stumbled upon another princess bearing a goddess name who died in a car accident. She died on the 29th at 29: