There can be only one.. 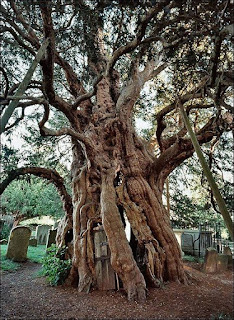 The movie Highlander has been "restored" in a 4K format. Don't ask me what that actually means. It will be shown at the Edinburgh Film Festival on 18th June. Clancy Brown, who played the Kurgan, will be in attendence along with other "special guests".


Clancy apparently noted : "It’s taken a while, but I swore to myself that I would return again to Scotland after filming Highlander 30 years ago where I first learned of Robert the Bruce, James Macpherson, The Fortingall Yew and, most blissfully, single-malt scotch whisky."

It's a fairly unusual esoteric combination.

Bruce was of course in charge at the alleged Battle of Bannockburn, the battle that ex Scottish political top-boy, Alex Salmond, claimed was the birthplace of modern Scotland. You can find more on it on the sidebar - mythomorph.

The Fortingall Yew is allegedly the oldest  tree (living thing?) in Europe. There's a legend that Pontius Pilate of Bible fame played as a child in it's shade. A book has been written, with  claims of Druid worship and even a visit from Jesus. As a yew tree grows, it's branches become heavy and droop to the soil. At that point of contact new roots will often form, and from there over time another trunk. In the case of the Fortingall Yew, the "original" trunk is almost gone, leaving an outer circle of later trunks.

The whisky speaks for itself.

Bearing in mind the myths surrounding Scotland and historical links with Egypt, for example Scotland and Princess Scota, it strikes me that perhaps Clancy is alluding to something more especially given the premise of the film and that Scotsman Sean Connery was cast as an Egyptian immortal.

I'll skip for the moment on the police investigation into grooming of minors by celebrities  - codename Operation Yew Tree - which sprouted after the death of Glencoe loving Jimmy Savile, although I have touched on it previously, and before.

Posted by Newspaceman at 12:37

Aang recent reported that Trumps mother was from Scotland a Mary McLeod. Made me think about this post and Trumps long time Scottish links as well as his NYC base. This is the opening narration from the first film


From the dawn of time we came; moving silently down through the centuries, living many secret lives, struggling to reach the time of the Gathering; when the few who remain will battle to the last. No one has ever known we were among you... until now.

then
In 1985, Connor MacLeod, also known as the Highlander, is in New York City. In an arena parking garage, Connor is confronted by fellow immortal Iman Fasil, and decapitates him, upon which an energy surge destroys several cars around him. He hides his sword just as police swarm the exit to the garage, and arrest Connor.

The story then goes back in time to the 16th century Scottish Highlands, in the village of Glenfinnan on the shores of Loch Shiel. Connor and his clan, the Clan MacLeod, prepare for battle.

Loch Shiel is the location of the fictional Black Lake near Hogwarts in the film versions of the Harry Potter series. It is also the fictional birthplace of Connor and Duncan MacLeod from the Highlander franchise as well as the actual location of the boat scene with Ramirez in The Highlander (1986). The loch was also used in the filming of the movie The Master of Ballantrae starring Errol Flynn.

Christopher Lambert as Connor MacLeod, a 16th-century immortal born in Glenfinnan, Scotland near the shores of Loch Shiel. Under the alias Russell Nash, he lives and works as an antiques dealer in present-day New York.


Sean Connery as Juan Sánchez Villa-Lobos Ramírez, an Egyptian immortal. Born Tak-Ne in 896 BC, he became an immortal after being run down by an out-of-control horse and cart. At the time of meeting Connor, he was living in Spain and working as the Chief Metallurgist to King Charles V. He is beheaded in 1542 while fighting the Kurgan.

Clancy Brown as The Kurgan, a Russian immortal living under the alias Victor Kruger. Born on the border of the Caspian Sea in the 10th century BC, he was a member of the Kurgan tribe. He travels to New York with the intention of killing the few remaining immortals and claiming the "prize".

Many thanks for that.I read Aang's take, most interesting.