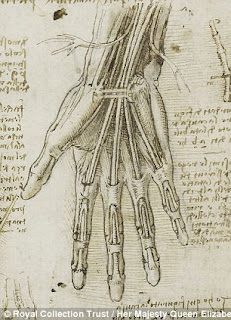 Recent posts have noted the coincidences between the Pope's visit to ritually meet the Queen at Holyrood Palace, Edinburgh (Auld Reekie*), back on 16th September 2010, and his lunching thereafter with Cardinal O'Brien, where they indulged themselves in food, then prayers over the secretly transported St. Andrew's bones in Morningside. As we know the Pope is now retired, a new Pontiff  elected yesterday - No Smoking Day in Scotland - whilst the Cardinal has gone too, after lurid "marmite motorway driving" allegations stretching back 33 years were publicised in the media (Cardinal sins). Meanwhile, the one gloved Queen is still ill, having missed her Rome trip.

On Tuesday, 12/3, revelations were announced re more bones and Holyrood. Well sort of. According to the mail on line, 30 sheets of Leonardo da Vinci's anatomical sketches are to be displayed at the Queen's Gallery at the Palace of  Holyroodhouse from 2nd August to 10th November. One wonders where they will be on 11/11, given ongoing thoughts re those digits here. Maybe on an overnight trip to Rosslyn Chapel -which allegedly took 40 years to construct - if one were to consider the apparently fictional musings of Dan Brown and his grail-code.

To close, details were released on Monday past re the forthcoming Commonwealth Games in 2014. The baton is due to leave Buckingham Palace on 9th October this year and head directly to Glasgow for 10/10 (that's XX in Roman terms). From there it will travel to India to begin it's 500 day journey which culminates in a 40 day tour of wild and windy Scotland, before the XX games begin on 23rd July 2014.

Note that the ballot for Scottish "independence" is due in Autumn 2014 and, as I have stated many times before, an independent Scotland is paramount in terms of ritual and the raising of Prince William, considering both the Stone of Destiny and (House of Stuart) James 1st and 6th, UK amalgamater and Bible reviser. Some say that the House of Stuart have links with the Merovingian Dynasty, Dan Brown's "bloodline" of Jesus (here).

* Auld Reeekie was the nickname once given to Edinburgh due to the plumes of smoke which rose from the chimneys of the tenement buildings.
Posted by Newspaceman at 11:16

I would go with the omen too, especially given the link content.

When it comes to the Jesuits, I am bewildered anyway. Some say that James 1st & 6th was working hand in glove with them and was not really of the protestant faith. It's most difficult to get anywhere with the reality.