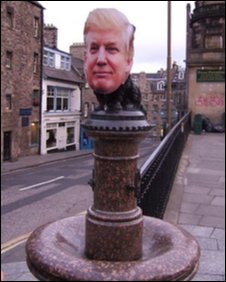 Ex Scottish First Minister, Alex Salmond, and would-be American president, Donald Trump, have fallen out. Allegedly. It's not new, they were buddies but Donald was not happy about some offshore wind turbines being installed close to his "best golf course in the world", the one in the North East corner of Scotland in Menie that the locals were, in the majority, unhappy about.


Yesterday, we were told that after a radio show in which Alex had a dig at Donald, the stinking rich tycoon responded in the usual manner, bragging of his future investments to the Scottish economy whilst slating Alex for releasing alleged winter-solstice Lockerbie bomber, Abdelbaset al-Megrahi, early on compassionate grounds.

Apparently, al-Megrahi was working on the direct orders of Gaddafi, which I'll go along with for the purpose of this post.

On the Autumn equinox, 23rd September 2009, the BBC reported that construction of a tent which was being pitched close to New York to house Gaddafi, who was due to speak at the United Nations, have been terminated due to planning regulations. The land belonged to Donald Trump who accepted that "it was leased on a short term basis to Middle Eastern partners who may or may not have a relationship with Gaddafi". BBC News

On the equinox, Gaddafi spoke at the UN, directly after Obama and directly before Scotsman, Gordon Brown.

Back in Scotland, on the equinox, something was emerging. At this point Donald had not yet begun construction of "the best golf course in  the world" albeit he had secured planning permission after an initial refusal by appealing directly to the Scottish government who, at that time, were led by Salmond.

The morning after the equinox, the 24th, many statues in Scotland had been defaced overnight by means of the attachment of a Donald Trump face mask. The perpetrators were, allegedly,  a group calling themselves the Menie Liberation Front. The image up top is that of the Greyfriars Bobby-dog statue. It is popular in it's own right with tourists, however more recently Harry Potterites have congregated close by given Rowling's cafe -where she used to write - and the alleged grave of Lord Voldermort are in close proximity.

Some people believe that statues and suchlike are often more strategically placed that one might consider, in terms of invisible energies of the type that Aleister Crowley was fond of. One may even consider that congregating humans may even have an effect on such, an effect which can be utilised by those in the know. Hence, perhaps, the emergence of the Loch Ness Monster, close to Crowley's energy laden Scottish abode. 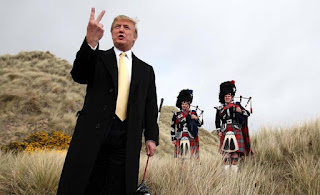 Note that Donald utilised the services of a contractor called Sol (as in the Sun) to construct his course. He chose the date 01/02/2010 to announce this.

Posted by Newspaceman at 11:53