As surmised in the last  post, my conclusion on the Olympic opening ceremony is that humanity is sleepwalking into a technological hell, whilst the "elite" chuckle at our collective stupidity. Manchester born singer, Morrissey, appears to share the sentiments, claiming fans have a "Nazi" mindset, that the Royals have hijacked the games for their own nefarious purpose, whilst urging the British public to "WAKE UP". (mail on line) 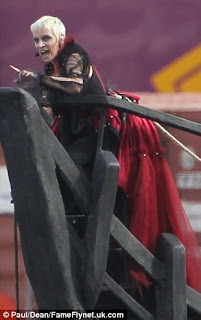 Meantime, according to Olympic closing ceremony artistic director, Kim Gavin, it is promised that the finale will be the "best after show party of all time", focusing on fifty years of music whilst in the process creating a "mashed up symphony" which will take "people on a musical journey from Elgar to Waterloo Sunset in 30 tracks".(BBC news) 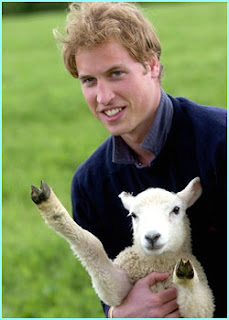 What we also know from the mail on line is that Prince William will not be in the stands watching, as he has "to work". I will stick my head, including potential over-active-imagination, on the block here and suggest that William's "work" will be somehow related to the ceremony - a secret so to speak. Whilst in the opening ceremony his grandmother, HM Queen, had a starring role - appearing to parachute in from above with 007 James Bond - my suggestion is that Wills will appear from within the ground itself, perhaps rising under the tree on the flag infested replica Glastonbury Tor; after all it did levitate, and show it's roots, in the opening ceremony. From there, he will somehow be involved in the handover to Brazil, potentially in the company of a replica Christ the Redeemer statue. Again, the image in my mind is that of Baphomet and the hermetic "as above, so below" mantra. 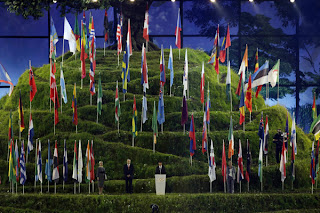 From there, my forecast is imminent global financial meltdown,  forcing the countries of the world together in one big happy family; after all money is, unfortunately, our common bond. The symbolism of the as yet un-capped pyramid on the American dollar bill surely alludes to this, rather like the lights surrounding the London Olympic arena. Let's not forget too that Manchester United -  the Red Devils - floated on the NY stock exchange last week. 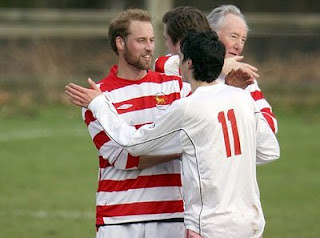 Tying in with these thoughts is extinct volcano, Arthur's Seat, in Edinburgh, illuminated each evening since Thursday past in an event called Speed of Light. When it erupted all those years ago it's plug, or capstone, landed about a mile away. It now forms the foundations for Edinburgh Castle, home of alleged "Stone of Destiny". As I have noted many times before, the game plan is to create a global United Kingdom, a golden age, a New World Order, and, as all alchemists know, one has to take everything back to base before rebuilding. Whilst, as all good magicians know, ritual is everything, thus see Stuart king and Bible promoter/reviser, James 6th and 1st. 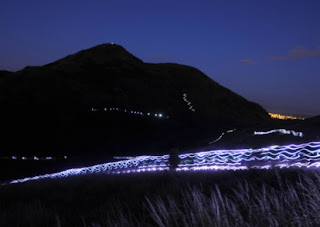 
Bearded William image from my Christmas 2008 post - One for the horn Baphomet !

Oh Lord, imagine if they actually do it in the way you describe!!!!

Brian, I had the very same thought and posted it (although, sans Wills) then came here and saw your post... now I have chill bumps on my arms...

Cheers to you both; no Wills, just the phoenix.

HI, did you see my latest blog post. The Devils are out LOL!

I have read it Marie, thanks, there is much info within I had no clue about.