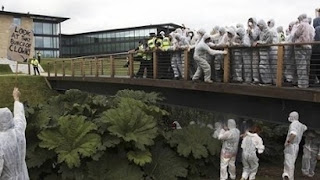 Beginning where I finished the last post and Gandalf the Ruppell's Griffon vulture, I am pleased to report he was found safe and well, perched on a telegraph pole at an old brickworks at Easter Jawcraig, Slamannan, Falkirk. One wonders if, during his travels, he hovered above Climate Camp at Gogar, pondering over their performance art...
As for the camp itself and the promised "Monday of action" against the Royal Bank, it seemed to pass fairly innocuously; some super-glued rebels, and some placard waving seemed to be the grand total, although there were apparently some last minute skirmishes with the authorities.
Sunday however was slightly different. The camp had previously been peaceful when, all of a sudden, a platoon of eco-warriors, all dressed in white, marched ominously towards the bank headquarters. They carried a standard above them, emblazoned with an image of the sun. Between them and their target flows the Gogarburn, no doubt fairly oozing given the recent rain. A footbridge links the two spaces and we saw a handful of police officers, perhaps caught off guard, valiantly attempting to defend the crossing point. Within a few seconds their enemy forces had broken through the cordon and rushed towards the large glass 'n steel structure, some trying in vain to smash the large windows, others dancing and whooping with delight. However, police reinforcements soon arrived to quell the disturbance.
Again recalling the story of William Wallace (see last post). A knight, landowner, rebel leader and outlaw, his main military achievements were overseeing the Scots army during the early part of it's Wars of Independence, firstly at the Battle of Stirling Bridge (the small bridge being paramount) where he defeated King Edward - the hammer of the Scots -and his army on 11th September 1297 , followed next year by the Battle of Falkirk on 22nd July, where he got thoroughly beaten (note where Gandalf was discovered). After this he bolted to France, handing over control to Robert the Bruce who, with the alleged help of the Knights Templar, routed the English forces at Bannockburn thus paving the way for Scottish independence via the Declaration of Arbroath - the model for America's own Independence Declaration. As noted in my last post, Wallace was beheaded on the "Royal Bank day of action" - 23rd August - in 1305, aged 33 or thereabouts; so sketchy are details of the man that even his birth date is unknown, most tales originate from a Royal Court entertainer and storyteller going by the name of Blind Harry .
Yesterday saw five climate change protesters appear in court. Three were accused of breach of the peace in relation to glueing incidents and chanting, whilst another faces vandalism allegations in respect of defacing litter bins. The last though is the most interesting and relates to the aforementioned bridge battle: A Martin Wallace, from France, is accused of of "assaulting Sgt Kevin Storey of Lothian and Borders Police at Gogarburn Bridge on 22 August by rubbing his head, which had nettles attached, against the policeman's arm." 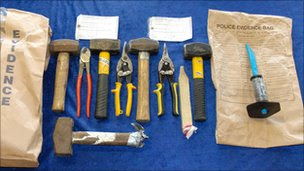 cheers
Note - In my recent post The Braveheart Enigma , I first noted the prominance of this William Wallace theme, it should be noted that boxing promoter Barry Hughes' wife appeared in court last Friday, charged with various illegal activities.
BBC - protestors in court.

Resonates with the colour white. Cheers.

Resonates with the colour white - brown

Am I right Gollum ?

If it's not that, then toilet roll Gollum, the triple layer good stuff.

I thought you could use some MATERIA(L). This will bring us FOOL circle, resonating reality in an earthy kinda way. cheers pal.

Your defo on the right track though. Toilet peper can be your MEDIUM for a start.

Now if you can think up some excrement to put down on it (as i see you have distinctly managed rather well) so that it starts resonating the word "BULLSHIT" then perhaps you will have some decorum and flush the offending shit down the toilet rather than inflicting you tiresome meanderings online to bore us all to tedium?

Resonating a hearty cheers to you pal.

Who is the "us" who are bored to tedium and why do they bother reading this if that is the case ?

Maybe YOU are bored anyway, in general. Maybe your life is shite.
You got a lot of time to fill in between wanking sessions ?

I am bored too, pal.

You can fuck off too, away and join your pal; try a wanking competition.

You will need to see anon, Barry. He is co-ordinating the event but might not be back here, he finds it boring I am sorry to say.

Any sign of the bored geezer who's organising the tournament ?

I'm bursting for the competition, any developments ?

lol so thats what tossing the caber means!

Is this event to take place on Calton hill or the toilets at the top of Easter rd?

Spunk in the eye at 5 paces or a cheeky wee peek through the hole?

Will you be participating Newspaceman or will one of Edinburghs reknown lawyer's represet you?

Cheers with a resonating "och aye!"

Plus he looks like hes probably got a bigger cock than you.

Naturaly i reccomend him to represent you for any misdeeds under the criminal sexual perverts act 2012.

Ok i feel a bit bad now. thats the bum deal in having a conscience. so ill say that you have a few good article in between the tripe and thats why i am a glutton for punishment besides i have a good chuckle when you bite lol

I certainly wont be going near Calton Hill, the very notion of self gratification in yon half finished acropolis thing resonates the blind man trying to get to the buffet but being attacked by giant birds in Jason and the Golden Fleece (the version shown on TV in the early 70's).

wow see now your thinking lateraly. The mind is boggling. it would probably be a cosmic event. I dont know what to say.

If you change your mind be sure to tell us how you got on.

It resonates a satanic inversion of the sword and the stone mythos.

I have a friend whos cousin fatty is a local homo who gets well paid to shit on edinburghs high court judges faces, not all of them but a fair few.

see told you id get you some raw material. Thats livened your blog up you see? The unique input of shit stirring Qi energy should enhance your dowsing powers now and i fully expect you to now come up with a cracker or two, you will see.

You should try having a wank ontop of the greek acropolis atop calton hill and see what happens, you would be that "blind man trying to get to the buffet but being attacked by giant birds in Jason and the Golden Fleece". Granted in this case those birds would be edinburghs randy poofs but that might add to the thrill and urgency of the matter in hand, the holy grail, the sword in the stone. If you fail you will be gobbled up by some wretched foul mouthed ghoul straight out of John Lewis or the fines department of edinburgh sherif court (or most departments come to think of it). So if you do dont dilly dally and take a chib to be safe.

Yeah I know your friend's cousin Fatty too, he is full of shit.

See, ill wager that the message boards of Swiss or canaian synchromystic sites dont have the canny banter found on a scottish website such as the daily record comment forums or here.

No wonder the ranks of the SAS are recruited from our fellow countrymen. "Haes like us?" and "fandabydosee!". They had legions of wee glasgwegian hardmen in ww2 equiped with chibs who used to give bosh a bloody nose.

McMossad? Im just telling him to bring me something juicy.

McMossad tastes like shit tell him i want burger King and make it a big juicy one with lots of relish.

"...perhaps you will have some decorum and flush the offending shit down the toilet rather than inflicting you tiresome meanderings online to bore us all to tedium?"

how many of you are there?

Anonymous said...
This comment has been removed by a blog administrator.
2 September 2010 at 16:40