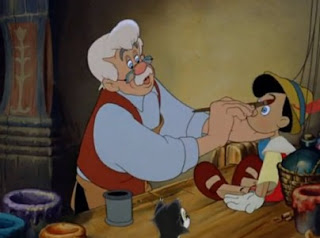 I managed to watch the short animated Olympic "mascot" "Out of a Rainbow" movie again yesterday and a couple of points jumped out - although it needs to be remembered that this was only the introductory part of the story.

Basically, the plot goes that an old chap is retiring from his job at a steelworks in Bolton. As the "last" girder - marked 2012, London Olympics, 070605 - is completed, kindly George gets to sign it, then hands his gaffer his protective clothing before collecting two "scrap" droplets of metal and cycling home to his wife, dog, and two grandchildren. Here, overnight in the bright light of a full moon, George works like an alchemist, eventually producing two little metallic creatures which he and his wife present to the children in the morning - carefully wrapped in a pair of shoe boxes, size 11.

They place their gifts on the window sill before a rainbow shoots through the window and brings the toys to life; they cavort and dance with the dog (whilst we see it's name tag, Unity) then shimmy along a bookshelf where we spy a book "Much Wenlock" and a picture "Stoke Mandeville Games", hence their names. However the "fun" is short lived, the rainbow returns and the cylops-like creatures have to go and fly out the window; although we are reassured by the narrator, Michael Morpugo, that they will return.

Notwithstanding the ongoing Wizard of Oz theory subscribed to here, do we not see a reincarnation of "occult" Pinocchio at work- now space age, although maybe it is too early to know for sure. See Vigilant Citizen - The Esoteric Interpretation of Pinnocchio:

“There are two ways to read “The Adventures of Pinocchio”. The first is what I would call “profane” where the reader, most probably a child, learns about the mishaps of the wooden puppet. The second is a reading from a Masonic point of view, where heavy symbolism will complete, without replacing, the simple and lineary narration of events”.
- Giovanni Malevolti, Pinocchio, mio Fratello (free translation)

Note: 07/06/05 was the date that the London Olympics won the bid to host the games - make of that what you will, given the "last pipe required for the construction" was marked in this manner.

Email ThisBlogThis!Share to TwitterShare to FacebookShare to Pinterest
Labels: cycles of time

Note at Wiki that the meetins about the Olmpics took place in the Raven Hotel. I lived near Wenlock and had a few good beers there

I include Raven for its symbolic value, as far as the Olympics 'nevermore' might be appropriate.

I can see King William walking into the Olympic stadium hand in hand with those 2, 4 eyes between them, like some Luciferian trinity. Wills will whisper to them and in a high-pitched space voice scream : Let the Games Begin' at which stage stormtroopers will take over various parts of Britan and we'll all live happily ever after

About the rainbow in your article ... Remember the story of the great flood? When the rains came, all of the nephilim were wiped out as well as their entire civilization. In the end a rainbow appears. Well, after seeing so many Wizard of Oz syncs, I'm thinking "Over the Rainbow" may be referring to life before or on the other side of that rainbow.

That's all. Love your work! JM

Hiya aferrismoon, stormtroopers, or maybe children - programmed in someway by man-devil. Imagine one of the twins dies on it's adventures for example, the trauma etc - ideal.

Hiya JM, thanks for comments, appreciated. There is a rainbow in one of the other official mascot images. I am not sure about the 2012 carnage senario - why would the elite be wasting their time and money if it is all to be destroyed (and they know).

The rainbow to me resonates the ending of WoZ - which I confess never to have seen in full. When i was a child I was encouraged to view it when it came on, but I found the beginning troubling in some way - so did'nt. I know though that at the end Dorothy gets to Emerald City - which seems to be a city based on tyranny and fear. I envisage this on a global scale post 2012, plus the quest for the "super human" - DNA, genetics & chip etc. Image they start feeding human gene patterns/behaviour patterns etc etc into a giant speadsheet, then sifting the data. I would image that would be the end of the human as it "is".