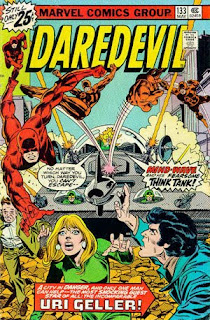 As I write, 6/3, super psychic and Scottish landowner Uri Geller shivers, his fingers blue as Glasgow Rangers, whilst he tenderly grasps his "y shaped twig" during a daring 24 hour attempt to find legendary treasure he believes buried by "Tutankamun's sister" on his Lamb Island in the Firth of Forth, just off Edinburgh. (Quotes above and below from BBC report) 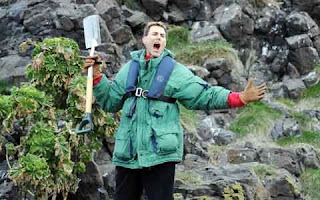 Mr Geller believes it could be the site of treasure buried by exiled Egyptian Princess Scota.

"The Lamb is one of the keystones to British mythology," he said.

"I am fascinated by the connection between the pyramids and these islands."

I touched on the "pyramids of Scotland" only last week, in connection with the Melrose Alex Salmond effigy lynching, however have brought up the subject previously, indeed last February in my post All 2 Geller now I broke the news of Uri's 11th February (11/2) acquisition of the famed island, whilst highlighting the code-name of Prince Philip's funeral arrangements: Forth Bridge, and the architects of the planned 3rd river Forth crossing: Jacobs Arup - along with their Olympic related history. 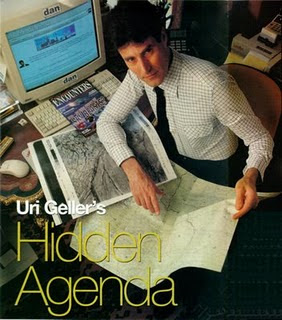 In that post I utilised one of Uri's own images for enhancement: "Hidden Agenda", reshown above for convenience. Eagle eyed correspondent aferrismoon noted the the computer bore a double Dan logo, which he equated, through gematria, as 2 x 54, equalling 108. (See his posts AtomHeartMatter & Prime Time). In my last post comment section he kindly explained that 2012 is a dragon year, as was 1904 (a (108 year difference), in response to a query regarding Aleister Crowley's The Book of the Law, a book which was written in Egypt after contact from a "higher spirit":

The general method that Crowley used to interpret the obscurities of Liber AL was the Qabalah, especially its numerological method of gematria. He writes, "Many such cases of double entendre, paronomasia in one language or another, sometimes two at once, numerical-literal puzzles, and even (on one occasion) an illuminating connexion of letters in various lines by a slashing scratch, will be found in the Qabalistic section of the Commentary."
Crowley wrote the book in a magikal three days, completing the text on 10th April 1904, a leap year thus with an additional day slotted in . The Stone of Destiny or Coronation Stone is said to have been brought to Scotland by the aforesaid Scota. All recent British monarchs have been "installed" on it and, without going into too much history, at one time it was taken by the English and kept at Westminster Abbey, although this changed on Christmas Day 1950 after it was "stolen" back and returned to Scotland, subsequently being left at Arbroath Abbey on 11/04, the same date as Prince William got his "wings", as King William of Orange was crowned joint sovereign of Great Britain , the same date as that of an "anonymous" letter sent to top judge Lord Cullen alleging a masonic conspiracy in relation to the Dunblane tragedy and the same date that the school gymnasium - scene of the latter carnage - was demolished.
Before I get too far off course, why buy an island where you believe treasure to be buried, yet only hunt once a year ? Could it be that Uri, in the manner of Crowley and his "sources", in the manner of David Icke and his "reptilians", is telling many important truths yet browning the water with his talk of treasure, perhaps superficially as part of a public relations/money making exercise, although perhaps more sinisterly.. Surely a man possessed of highly tuned "other dimensional" skills would be able to located any hidden loot relatively quickly. Could it be that the "hidden agenda" snap previously offered should be taken more literally, with the double Dan (108) logo telling us more about jewish Uri's true colours - bearing in mind, for quick example, that the Royal Box at the new 2012 Olympic starred Wembley is located on the 108th level and that Uri seems almost obsessed about double 11 (note for example the date of his purchase, 11/2) and the Dark Prince's recent Hello magazine appearance.

Dragon legacy - secret history of an ancient bloodline (From Transylvania to Tunbridge Wells).
Posted by Newspaceman at 15:11

Very good Newspaceman. I am impressed.

"Perhaps my dowser's instinct has sensed rich mineral deposits or a crystal core to the rocks. And I love the idea of perching at the sea's edge, in serene solitude, watching the seals." - Uri Geller

Thanks Kal, appreciated. I will check your new post later tonight.

Note too Geller's ref to "disturbing the seabirds" in his quest - a wild goose chase ?

As you will know if you frequent my website, I believe there is something about the number 11, and particularly 11:11. Who knows what it is & what it symbolizes, but I strongly believe it is a positive sign.

On the way to the island, I experienced a bombardment of 11:11 experiences....

We arrived to Edinburgh on platform 11, and the temperature was 11 degrees....

On the way, I photographed Durham Cathedral, which I was then informed was built in the 11th century....

I was informed that Orions belt stars were fully risen to the east horizen while we were on the island, at 1:11pm....

Even those reading this of a skeptical disposition, you have to admit this is pretty strange!

My mentalist friend Drew McAdam insisted that we just had to see Rosslyn chapel before we left - so we decided to miss the train we were supposed to be getting, and catch a later one so that we could experience this place, and I'm very glad we did!"

-Uri/Uriel is one of the four princely angels (Sar ha-Panim) that surround [or form] the Throne of God.

-And he showed me a pure river of water of life, clear as crystal, proceeding from the throne of God and of the Lamb. .

-The throne of God is the Ark of the Covenant.

I often wonder if Geller et al. are not employed by News Service for the 'fun' bit of the news

Anyway Uri Geller = UG, and Tutankhamen and the other pharoahs buried in the Valley of the Kings might be likened to Cavemen - Troglodytes

Cheers again Kal, the notes from Uri's website say it all really.

Having said that, the constellation Orion is the "hunter" which ties in well with his quest, checking wiki it appears to have connetations with both 3 kings and 3 marys.

Best maybe to have a look at Jeff's article which discusses Orion in the context of Sirius:

Also see Secret Sun, Chris writes frequently about Sirius although I don't always agree with his sentiments about other matters:

Still need to read your article, will do this week and get back to you - struggling for time.

Meant to say, note the Eliphas Levi , "Baphomet style" pose adopted by Geller, the cameras below, the spade the torch and other hand.

Going back to an old post found that R.Oppenheimer was born on April 22, 1904, so just a couple of weeks after Crowley's message

sizegenetics discount said...
This comment has been removed by a blog administrator.
20 December 2012 at 08:38